In the days after NYPD Officer Darren Ilardi struck and killed 24-year-old Ryo Oyamada on a dark street in Queensbridge, the department insisted that the officer's emergency lights were engaged at the time of the crash. Witnesses and video footage later contradicted this assertion. And at a DMV safety hearing yesterday, Officer Illardi testified that his strobe lights were in fact off when he hit Oyamada. "I cut the lights off," Ilardi said. "The next thing I know there's somebody in front of my car, I tried to swerve out of the way, and I struck the pedestrian."

Asked by administrative law judge Kathleen Whelan why he turned them off, Ilardi responded that officers are taught to do so as a "tactical" maneuver.

"When responding to a job such as an assault in progress, with a knife, you don't want to give away your position and have people flee."

Officer Ilardi's partner, Jason Carman, testified to the same effect. Neither officer could remember when the lights were turned on, and when they were turned off to avoid detection. When Steve Vaccaro, the attorney for the Oyamada family, pointed out that 911 call records obtained during the NYPD's own investigation showed that the officers were actually assigned "to a different job at a different location," Ilardi's attorney objected, and the judge agreed.

"The officer has indicated under oath that he was going to an assault in progress on 12th Avenue," the judge said flatly.

The safety hearing, held two years after Oyamada's death, was not an ideal venue to discuss what Vaccaro called a "material variance" between what Officers Ilardi and Carman told the Internal Affairs Bureau investigators and what they were currently telling the judge in a drab conference room next to JFK airport.

The hearing's sole purpose was to determine whether Ilardi was grossly negligent and if he should lose his driver's license; the information unearthed by the Oyamada family in a federal wrongful death suit was a separate matter.

Still, it was clearly not a routine hearing. Two senior administrative law judges, an attorney from the NYPD Legal Affairs Bureau, and an attorney with the NYC Law Department were all present. 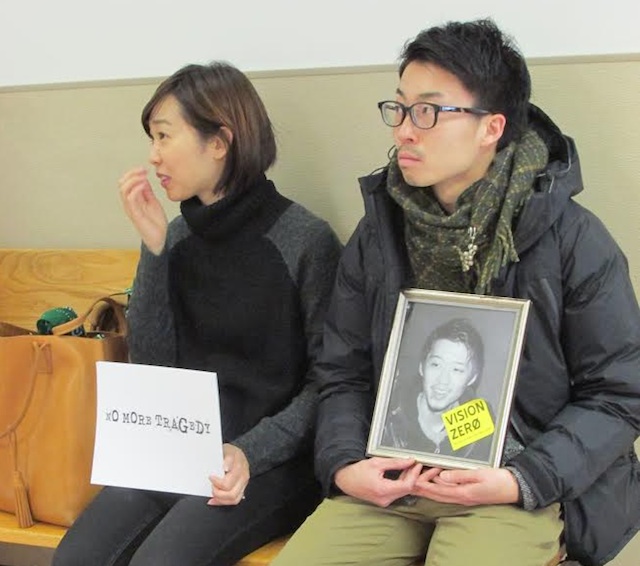 Ilardi's attorney, Mitchell Garber, wearing a grey suit and shiny silver PBA cufflinks, moved to dismiss the hearing at the outset, asserting that the DMV's rules stated that a safety hearing following a fatality would be held within a year after the incident; two had now elapsed. Garber also objected to reporters recording the hearing, even though the DMV records every hearing at a matter of procedure.

"Unfortunately, a New York City police officer, in performance of his duties, properly and appropriately performing his duties, was involved in an accident, and I submit it was an accident, which resulted in the death of a family member, a friend, a relative, all the people that are here," Garber said, alluding to Oyamada's family and friends sitting in the room.

"Nothing that has taken place in any way changes that. Certainly I think that if you consider Officer Ilardi's demeanor, the manner in which he testified, clearly, his body language, his answers to questions, convey that."

During his testimony, Ilardi seemed unsettled, bowing his shaved head and occasionally dabbing his face with tissues. He could not recall how fast he was going when he hit Oyamada.

"I hit the brakes and tried to swerve away," he testified.

But a detective who conducted the initial investigation told the judge that no skidmarks were found at the scene. That detective was also unable to locate any witnesses, he said, because he arrived at the scene hours after the incident. Ilardi had testified that immediately after he hit Oyamada, "There was a crowd forming, so I tried to keep the crowd away."

The Internal Affairs Bureau, which conducted an investigation into the matter and found no wrongdoing, was not present at the hearing.

At the end of the hearing, Judge Whelan offered her condolences to the Oyamada family, and Officer Ilardi, and said she would need time to render a decision. She also allowed Tsukasa Oyamada, Ryo's father, to read a brief statement in the room, off the official record, and accepted a packet of NYPD internal documents from Vaccaro as evidence.

A DMV administrative law judge took about a week to revoke the license of the driver who killed 4-year-old Allison Liao in a Queens crosswalk (though that driver will likely have it reinstated soon).

Vaccaro later said that the attention paid to Ilardi's safety hearing by state and city officials "reflects the fact that there is a tremendous effort underway by parents who have lost children and other crash victims and survivors to push the DMV to fulfill its statutory mission of accountability for dangerous drivers."

"These hearings have all been terribly delayed, and most likely they never even intended to hold one for Officer Ilardi," Vaccaro added. "The only reason it was held is because the courage of the Oyamada family to insist that attention be paid and procedures be followed."

Outside the DMV building on Rockaway Boulevard, Tsukasa Oyamada told reporters that he thought the process was "inappropriate, because the decision is going to be made solely by the statements and the documents provided by the police and the driver. Based on that type of evidence I do not think the decision will be fair."

Asked about how the death of his son has affected him personally, he paused for several seconds. "I think the experience has united the family together."

In the parking lot, Ilardi's attorney Mitchell Garber told reporters that he had no further comment; his client had already left.