Cooper Union Alumni: We're Waking Up From A Bad Dream

Dozens of Cooper Union students, teachers and alumni gathered outside of 41 Cooper Square on Monday night to celebrate an impending settlement between Cooper Union's Board of Trustees, and a group of alumni and faculty that sued the historically-free school last fall over alleged mismanagement, and its recent decision to charge tuition.

"This is a message to colleges and universities across New York State to end the corporatization," said State Senator Brad Hoylman. "Don't treat your alumni as shareholders and your students as customers."

This week's settlement is expected to mark the culmination of Attorney General Eric Schneiderman's investigation into Cooper Union's finances, and would impose a Consent Decree and cy pres (a legal term for honoring a donor's intentions when they can't be carried out exactly) to try to return the school to a tuition-free model "as soon as practical."

Provisions of the agreement include a new Free Education Committee of students and alumni to develop a no-tuition plan; the addition of two voting students and two voting alumni to the board; and an independent financial monitor to oversee the board's spending. According to the proposed agreement, Schneiderman would reassess the school's finances in the spring of 2018.

"We'll continue to monitor the school's progress to make sure it's on a path to long-term fiscal sustainability—and, I hope, free tuition," said Schneiderman, in a statement.

"This is better than the lawsuit," said Scott Lerman, '81, a strategic advisor for the Committee To Save Cooper Union (CSCU), which brought the suit. Even if CSCU had won and rolled back tuition, Lerman says, "there never would not have been structural changes to the school."

For many, controversial 41 Cooper Square—which houses classrooms and studios and cost the school more than $100 million in the aftermath of the 2008 financial crisis—is emblematic of decades of careless financial decisions on the part of the school's board and recent presidents. According to Schneiderman's findings, former-president George Campbell was insured a $175,000 bonus when the building opened in 2009.

Since the early 1900s, Cooper Union has collected rent off of the land beneath the Chrysler Building which, according to the NY Times, makes up a whopping 83% of the school's $735 million endowment. In 2006, already in the red, the board used the Chrysler Building property as leverage to secure a $175 million loan from MetLife, in part to complete 41 Cooper Square.

In 1999, Cooper Union had a $10 million deficit. By 2011, it had ballooned 60% to $16 million—a development that former-president Jamshed Bharucha, Campbell's replacement, disclosed three months after his arrival that July.

Peter Cooper, a self-taught industrialist, inventor, and philanthropist, founded Cooper Union in 1859. He never had formal schooling, and believed that education should be "as free as air and water." Since the fall of last year, new students matriculating at Cooper Union have paid $20,000 per year—the equivalent of a 50% scholarship. This fall, according to the school, about 25% of the freshman class got full scholarships because of financial need. 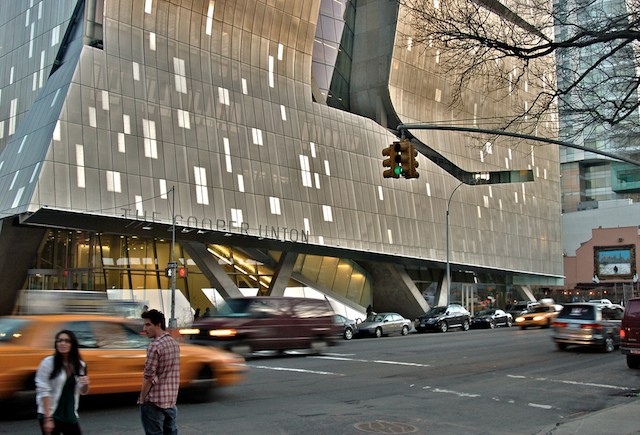 Students and faculty did not accept the transition to tuition quietly. In May 2013, a month after the announcement, more than 60 students occupied President Bharucha's office for 65 days, prompting the board to appoint a "Working Group" of students and faculty to come up with an alternate financial plan. The plan was dismissed.

Angered, CSCU filed suit against the school arguing that the decision to charge tuition went against the Cooper's charter. Schneiderman's investigation followed. And this spring, as details of the school's financial missteps spread ($10,000 for new blinds in the president's house, a $23,000 fee for celebrity speaker Fareed Zakaria), President Bharucha and five board members who had long been his vocal supporters stepped down.

"The view is that the board is changing," Lerman told us yesterday. "Some of the most vocal anti-free-tuition people are gone. Others don't really believe it's possible to be free, but they've agreed to something that we never thought they would agree to."

Casey Gollan, '13, a founding member of Free Cooper Union, a student organization formed in opposition to Bharucha's early suggestion to charge tuition in 2011, is less optimistic. He said that Bharucha's resignation was more important to him.

"That was the moment we saw the administration completely crumble," he said. With the Consent Decree, we "still have to make sure that this negotiation doesn't fall prey to loopholes. It could be death by committee."

Cooper Union spokesman Justin Harmon told us yesterday that the board supports returning to a tuition free model. However, the financial "hurdles" are still "large."

After yesterday's rally, Victoria Sobel, '13, walked us over to the empty storefront that used to house St. Mark's Bookshop, around the corner from 41 Cooper Square. Cooper Union leases the building, and on September 7th, she and a small group of recent alumni got permission from Interim President Bill Mea to transform it into a temporary community space called Nonstop Cooper.

"It's the only Cooper space where I don't have to flash an ID," she said.

When Sobel herself was an undergrad, "People were making art about the nature of the education here and about the political landscape without being prompted. And we're finally getting back to that. It’s kind of been like waking up from this bad dream."

Camila Villa, a freshman from Miami, has already made friends at Nonstop Cooper, a few weeks into her first semester. Yesterday, she held up one end of a giant painted sign that read "Free School Towards Free Society."

"Cooper was my cheapest option and my first choice," she told us. "I hope it's free when I graduate, but if not I want it to be free for future generations."