"Cool Cops" Let Scofflaws Chug Beer Instead Of Ticketing Them

The city may be getting sued after a cop knocked a man to the ground for dancing, but elsewhere across the boroughs, police are apparently totally chiiillll, maaaaan, just finish that beer up and let's go shoot some cans off the back of the patrol car, whaddaya say?

In the last month, we have heard of two separate instances of police declining to write summonses for open container offenders, instead offering up a reasonable trade: Pound that beer, and you can go.

The first instance came from a tipster named Claire, who in January found herself wandering from a friend's gallery opening in Bushwick with a half-consumed beer still in her hand. Absorbed with looking up her next destination, Claire failed to realize she had strolled right past a police precinct, and though she was not cognizant of the beer still in her hand, the cops posted up outside sure were.

It wasn't until we'd passed them and they'd immediately called me back that I realized what I had just done. So I walked over to explain myself and receive what I expected would be punishment, while my two friends hovered in the wings and looked anxious.

I was super apologetic and, as it happens, super sober. The beer was half-finished, and I made a logical, honest case without expectation of reprieve. And they reacted surprisingly well. A conversation that began with reminders of the fine I should face and of possible jail time softened into something more convivial. They issued neither a fee, nor a summons. What they did do was force me to chug the rest of my beer in front of them.

Really, I was given two options. I could throw my beer out in their trashcan—which I made to do as soon as they pointed it out—or I could finish it right here, right now, right in front of their eyes. They were cool guys. They got it. They liked to party. What they didn't like—could never stand for—was the idea of wasting beer. So what they strongly suggested I do was to down the rest, and be on my way.

At the cops' badgering, Claire finished her beer, and was allowed to proceed unmolested.

HUH. Fine, an anomaly. Or is it? Because today we caught wind of this tip from a Fordham student:

This past friday my friends and I were heading to a pre-game on Arthur Ave in the Bronx just off of our Fordham campus when a cop car rolled up on us. The two officers saw that my friend had an open 40 oz. of Budweiser and called him over to the car.

To our shock, he told my friend that he can either receive an open container ticket, or chug the remainder (roughly 3/4 of the bottle) without stopping. Without hesitation, he got on a knee and chugged the 30 ounces in about 30 seconds without stopping. We shook hands, shared a laugh, and bid farewell to the two very chill cops. 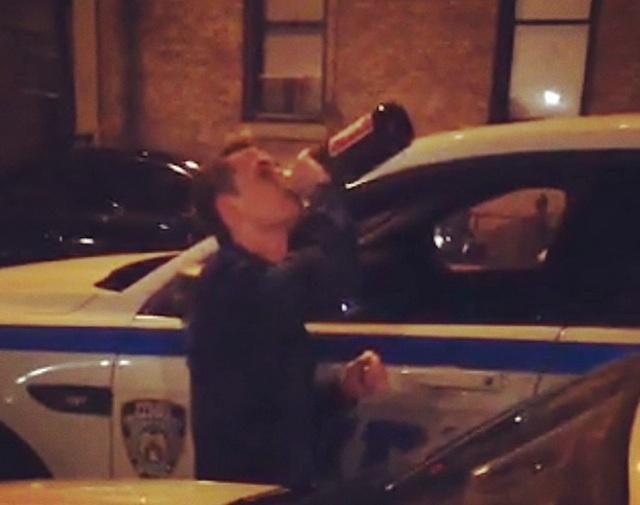 What's up with this? Is the bureaucracy of writing an open container violation especially onerous? Nah, said an officer I asked, who requested anonymity on the basis that cops can't talk to the press without permission from the NYPD press office. It's that cops are given a certain degree of discretion, meaning they can let you go if they feel like it.

"It's been going on for centuries," our source said. "It's nothing special. If a person is very cooperative, there are times I've let them go."

He noted also that the winter months are not exactly open container season—while summer sees a constant stream of open containers, the dead of winter is obviously less conducive to outdoor imbibing.

"In the winter, instead of getting 50 a week, you might only get one or two. If you see a guy, and it's your first one of the week, you might be like 'Alright pal, I'm going to give you break.' "

He added, perhaps unnecessarily, that discretion can vary wildly among officers. Not all cops will let you off with a wrist slap, regardless of your charm, to say nothing of personal biases of the cops themselves. As Claire put it:

The encounter smacked of a soft kind of sexism. These cops saw PYT in a bind and at their mercy; they could proceed however they pleased, and I would have to go along with it. Perhaps I should pull my head from the gift horse's mouth and be grateful for their leniency, but labeling leniency what is realistically an abuse of power, however small—their leveraging of authority to coerce a citizen into more serious illegal activity—isn't a thing I can, in good semantic conscience, do. That would mean that what I'm grateful for is really two police officers having opted for a gender-based brand of harassment, in lieu of the physical or violent brand I may have faced as a man. And that's a thorny sentiment to feel toward the people whose job it is to protect us all, regardless of sex or skin color.

#cool cops
#nypd
#open container
#summons
#original
Do you know the scoop? Comment below or Send us a Tip