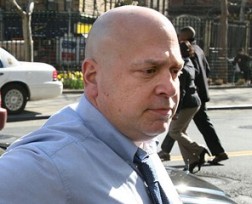 Two months ago, Sam Israel III was sentenced to 20 years at a Massachusetts prison for swindling $450 million from investors in his hedge fund, the Bayou Hedge Fund Group. He was supposed to report to prison yesterday, but he never showed up. Instead his 2006 GMC Envoy was found on the Bear Mountain Bridge, keys still in the ignition and the words "Suicide is painless" (the theme song to M*A*S*H) written on the dusty hood.

While suicide has not been ruled out, ABC News' Blotter one hypothesis is that he staged the disappearance, possibly buying a black market passport on the Internet. WNBC reports that there's surveillance camera footage showing a second car pulling up next to the Envoy, though it is "unclear from the tape whether Israel gets into that vehicle."

Israel's body has not been found, and the NY State Police believe they will find it, if he did jump; investigator Brian Cuccia said told the NY Times, "The river will give him up."

When sentencing him, US District Judge Colleen McMahon told him, "You were, in every meaning of the sense, a career criminal. You ruined lives. Financial fraud, white-collar crimes are every bit as heinous as every other type of crime and they will be punished severely."