Last night Downtown Brooklyn's Community Education Council voted in favor of a school rezoning proposal that will require predominantly white, upper-middle-class, bursting-at-the-seams PS 8 to zone incoming DUMBO and Vinegar Hill students to PS 307—a school that is currently under capacity, and predominantly serves African-American residents of the NYCHA-run Farragut Houses on York Street.

The meeting stretched until 10:30 p.m., more than an hour after its initial hard-stop deadline. The final vote was 6-3.

"I believe that tonight is historical," said City Councilmember Laurie Cumbo in her public remarks before a crowded room and bevy of news cameras. "This particular vote is being watched nationwide. My position is that we all have to make the important decisions to change the zoning to make sure that diversity happens."

However, she and others stressed that PS 307 needs further protections to preserve its racial and socioeconomic diversity. The majority of seats should be set aside for students who receive free lunch, she argued, and the City should promise that changing demographics will not ultimately make the school ineligible for Title 1 funding—additional funding for teacher training and special programing.

If the school were to lose federal funding under the rezoning, the DOE stressed that increased enrollment would increase the school's overall budget.

"We've got to make sure we preserve the integrity of the school as it was originally intended," Cumbo said.

Black and Hispanic students currently represent 34% of PS 8's student body, while PS 307 is 95% minority. Under the proposed rezoning, these percentages are expected to shift to 25-35% and 55-65% respectively.

Overcrowding has been an issue at PS 8 for years, thanks in part to robust real estate development in downtown Brooklyn. PS 8 has significantly stronger state test scores than PS 307, but was forced to cut its Pre-K program in 2013 because of overcrowding. It has no language program. At PS 307, Pre-K and kindergarten students take Mandarin lessons.

While the majority of the nine-member CEC 13 expressed qualified support for the plan, several of the speakers who took the floor on Tuesday called for its dismissal, arguing that the plan primarily benefits PS 8 by eliminating its wait list.

A large contingent of parents and community members from the Farragut Houses traveled to the meeting by school bus, and filled the majority of public comment slots. At one point the group picked up a chant: "No! No! No!"

PS 307 PTA President Faraji Hannah-Jones said that he fears the plan will fall short of preserving the influence of the school's current stakeholders in the long run.

As WNYC reported, the predominantly-white PS 8 served mostly black and Latino children in the early 2000s, before changing neighborhood demographics tipped the scales.

"All that we will get is another PS 8—a school that all of the black and brown folks built, only to lose all of the stake and ownership," Jones said.

"The rezoning proposal is designed to only marginally address a potential for a wait list [at PS 8]," she said. "It simply confers the benefit of exclusive access to PS 8 to Brooklyn Heights."

Representatives of PS 8's PTA relinquished their allotted chance to comment on Tuesday, citing shortness of time. However, the group formally endorsed the proposal in October, describing it as "the only proposal on the table that will move us forward." 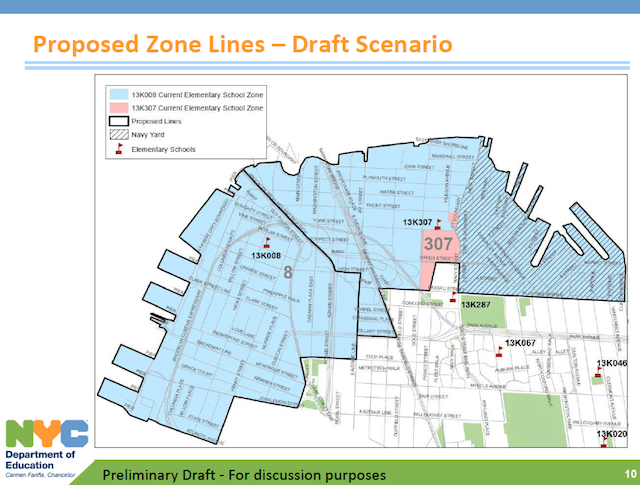 Speaking to us earlier this week, Jones described how the PS 307 PTA would proceed in light of an approved rezoning plan. He explained that the school is updating its website to attract students from other parts of the borough, and promoting itself as a school with a powerful technology focus.

"A lot of this has caused us to circle the wagons," Jones said. "Even if the zone goes through, DUMBO parents have the option to not go to the school. But what about the kids who don't have options? I think people need to get it out of their heads that a successful school is a white school."

PS 8's PTA declined multiple requests for comment on their reaction to the vote.

The rezoning plan will impact kindergarten and Pre-K students in the 2016-2017 school year, excluding those "grandfathered" into PS 8 by older siblings.

But Gallo, of the DUMBO Neighborhood Association, predicted that some parents in her neighborhood would not send their children to PS 307 despite the vote.

"PS 8 with its overcrowding still has higher test scores," she said. "When they say that test scores don't matter—since when? These are [the DOE's] metrics for our kids to get into middle school."

She added, "If the DUMBO neighborhood wants to go with this school I'm going to work with the Farragut Community on points of mutual interest. [But] the DOE thinks they can redraw a line and people will trickle in. That's not an effective solution."

CEC 13 Member Ed Brown grew up in the Farragut Houses. Before casting his vote in favor of the plan, he admonished parents for, as he put it, being "frozen" by fear. "Adults on both sides have frozen their minds," he said.

"People are holding on to what they deem belongs to them, and now gentrification and new buildings have surrounded the Farragut houses," he added. "Gentrification is here. It's not going back to the old Brooklyn that we remember. Those times have passed."

Treasurer Renee Burke echoed his sentiment. "Don't think of it as a takeover," she said, addressing the Farragut community members in the audience. "Don't think of everyone who comes in as a threat. Just be ready for it, because inevitably diversity will happen."

"We commend the CEC's approval of this plan, an essential step that will increase diversity and ensure the needs of students and families in the district are met," said DOE spokeswoman Devora Kaye in a statement. "We'll continue to work closely with all partners to implement this plan and provide support during the transition."

In November, the DOE dropped an equally-controvoersial rezoning plan on the Upper West Side, tabling the issue of overcrowding at elite PS 199 until further notice.

#brooklyn heights
#DOE
#dumbo
#farragut houses
#rezoning
#Vinegar Hill
#original
Do you know the scoop? Comment below or Send us a Tip