Parents currently zoned to send their children to two of the most coveted and crowded public elementary schools on the Upper West Side—PS 199 on West 70th Street and PS 452 on West 77th Street—have spent the summer and early fall voicing their opposition to Department of Education proposals to redraw school zone lines. "I've heard about kids who were uninvited to playdates because their parents are in favor [of the rezoning]," one PS 452 parent told us back in July.

Now the committee of parent volunteers that will ultimately approve or veto the rezoning has come out in favor of its most controversial components: A plan to move PS 452 sixteen blocks south to a larger campus near the NYCHA-run Amsterdam Houses—lengthening commute times for many families—and another to remove some of the buildings in the sprawling Lincoln Towers co-op community from PS 199 (ranked as one of the nation's top schools in 2013) to PS 191, a school with historically low test scores and, until recently, a contested "persistently dangerous" state ranking.

"Our position is that this is the plan, and they [the DOE] can either stand with us or not," Joe Fiordaliso, president of Community Education Council 3 (CEC3), the voting parent group, told the NY Times.

This week's letter [PDF] to the DOE from CEC3 also urges the city to add a third Lincoln Towers building to the PS 191 district, 205 West End Avenue, in addition to the proposed 165 and 185 West End Avenue buildings. According to CEC3, anything less could result in under-enrollment at PS 191 next fall, which is moving into a brand new campus at the nearby Riverside Center, a luxury residential high-rise.

As for moving PS 452 south, CEC3 noted that the school's principal is in full support of the move to a larger building, and that it would behoove the city to place a high-performing school into the building that PS 191 is vacating (the move has also been endorsed by a contingent of PS 452 parents).

The DOE has said that rezoning is crucial in Manhattan's District 3. PS 452 and PS 199 are less racially and socioeconomically diverse than the rest of the city—about two thirds of the student body is white at each school, and only about 10% of students qualify for free lunch. For comparison, black and Latino students make up 81% of PS 191, where 73% of students qualify for free lunch.

But Lincoln Towers and PS 452 parents, some of whom moved to the West 70s specifically to attend PS 452 or PS 199, have dug in their heels. "It seems that the people living closest to 199 are being punished by being sent to another school just because they want to somehow diversify the student body," posited Ziv Arazi, a parent currently in rezoning limbo, last month. 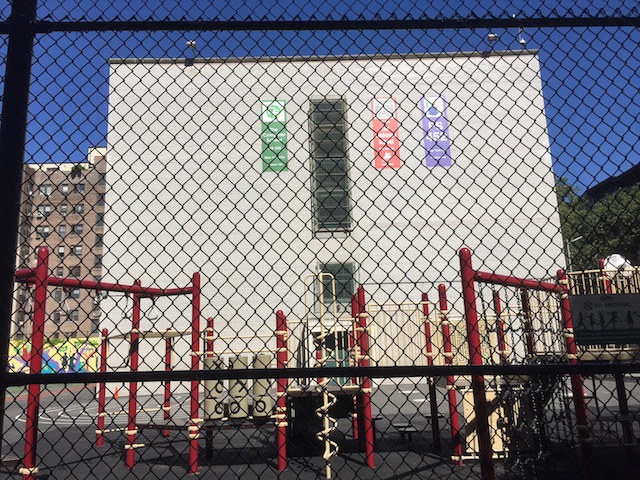 PS 452 on West 77th Street. The principal, teachers and students would relocate to West 61st Street under the proposed plan (Jen Chung/Gothamist).

City Council Member Helen Rosenthal praised CEC3's plan, which she said "allows for the creation of three strong integrated schools in the southern portion of the district."

All of the rezoning plans up for final vote in November exclude the northern portion of District 3 west of Morningside Park, and CEC3 is urging the DOE to turn its attention to the struggling schools in Harlem—issues include under-enrollment and low test scores—as soon as the rezoning drama to the south is resolved.

But some parents worry that the damage has already been done—that focusing the overcrowding and diversity conversation on the southern part of the district has allowed privileged families to dominate the conversation. (A proposal to syphon some families from PS 199's zone last year was rejected outright amid UWS family opposition.)

Maia Gelman, a parent at PS 75 on 96th Street, is a member of NYC Public School Parents for Equity and Desegregation, a group that has been pushing for "controlled choice" in District 3. The model, which CEC3 rejected this week, aims to ensure an even distribution of high and low income, special needs, and English language-learning students across all uptown schools.

"The current three-year rezoning process has delivered the message that the CEC and DOE are primarily responsive to the concerns of privileged families," Gelman's group wrote in a letter Wednesday. "The right of other students to an equal and adequate education seems an afterthought."

The CEC says it hopes to vote on the final proposal early next month.

"We value the CEC's leadership and partnership, and will continue to solicit feedback, host meetings and engage in robust conversations as we work to submit a final proposal that best serves all of the students and families in District 3," a DOE spokeswoman stated.

#department of education
#PS 191
#PS 199
#public schools
#School Rezoning
#Upper West Side
#uws
#original
Do you know the scoop? Comment below or Send us a Tip