After considerable backlash to the Howard Hughes Corporation's preliminary proposal to build a 50-story tower at the South Street Seaport, the corporation has introduced new renderings for the space next to Pier 17: a smaller, 42-story tower, shaving the height from 650 feet to 494 feet.

However, this was not enough of an adjustment to immediately win over the Seaport Working Group, a coalition of elected officials, community board members, businesses, and local residents. Manhattan Borough President Gale Brewer and Councilmember Margaret Chin have been outspoken about the development, and questioned whether the earlier proposal was appropriate for the area.

HHC, however, argues that the South Street Seaport piers are rapidly deteriorating, and estimates that the cost of repairing and rebuilding will cost over $1 billion, which no city or government entity is in a position to finance. The developer says it "is prepared to make an unprecedented private $171 million investment" to rebuild the decaying infrastructure, as well as create:

Nevertheless, Councilmember Chin told us in a statement today that the HHC had "not fully considered all of the guidelines put forth by the Seaport Working Group." Here's her statement:

"I can’t support the proposed tower in its current form, and I can’t support the development proposal overall in its current form. There’s still a lot of work to be done to make sure this plan truly serves the Seaport community, and we must strongly consider alternatives to the proposed tower. I look forward to continuing the discussion with Howard Hughes, the Mayor’s office and Borough President Brewer and the other members of the Seaport Working Group, as we seek to protect the uniquely historic nature of the Seaport, while also creating a vibrant community for residents, visitors and local workers." 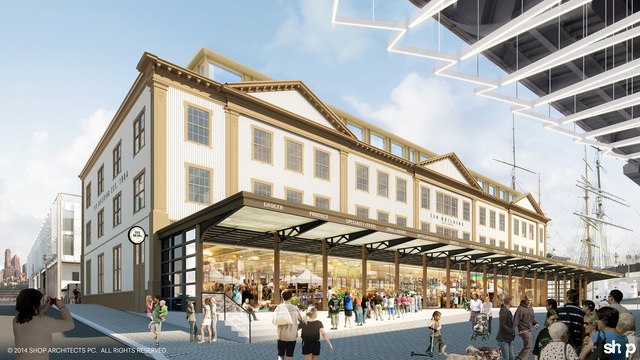 "Historical context, building heights, and maintaining the vitality of the area are all elements which must be factored in to any final project in this crucial Manhattan neighborhood—the neighborhood where, in many ways, New York City began. As I’ve said before, building a tower at the South Street Seaport is like building a tower at Colonial Williamsburg. Council Member Chin and I have requested that the Seaport Working Group convene a meeting right after Thanksgiving to discuss the HHC proposal presented tonight and evaluate it against the Guidelines and Principles the working group developed. I will withhold final judgment until after discussion by the working group.”

Following the release of the updated plans to the Working Group on Wednesday, the Save Our Seaport preservation group met to gauge community reaction to the proposal. The group had expected an update on the future of the potential tower site back in September, when they were told it was "a couple of weeks away."

Michael Kramer, SOS's rep in the Working Group, updated the audience with the long-awaited plans. Curbed reports that Kramer's summary of the HHC proposal largely focused on the contentious tower, which would contain "150 market-rate condos, retail at its base, and three stories that would house a middle school." He also noted the HHC plans involved "60 to 70 units of off-site affordable housing, possibly at Schermerhorn Row."

HHC Chief Executive David Weinreb insisted the development will invest more than $300 million in benefits for the lower Manhattan area:

"Today we presented a revised plan that embraces the guidelines created by the Seaport Working Group. Our plan preserves the historic district, repairs crumbling infrastructure and delivers the benefits the community has called for: waterfront access, a middle school that could also serve as a community center, affordable housing, funding to save the Seaport Museum and tall ships, and a fresh food market, among other things.

"The plan represents a more than $300 million investment in public benefits for Lower Manhattan, driven by the economic engine of a new residential building. We are proud to have the support of Lower Manhattan families and small business owners who know that the only way to truly save the South Street Seaport is to invest in its future. We are confident that as more residents learn about our plan, they will embrace it."

#howard hughes corporation
#renderings
#south street seaport
Do you know the scoop? Comment below or Send us a Tip
A new Gothamist is coming! We’ve moved comments over to our beta site. Click here to join the conversation and get a preview of our new website.