“What’s going on here is wrong,” Ortega said, raising his voice over the party’s blaring Latin music. “I grew up right here on Post Avenue. My whole life I’ve been here and it’s not fair that my mom lost her apartment to bullshit rent.”

Rodriguez was prepared for these critiques. Nodding, he told Ortega that stories like his were why the neighborhood needed more affordable housing development and resources for preservation.

“So there’s a real call you gotta make which is, for one, downsize the rezoning,” Rodriguez said.

“Downsize? No no no, we don’t want to downsize,” Ortega shot back. “We want to stop the rezoning.”

Five days later, Rodriguez would publicly throw his support behind the rezoning, which is intended boost residential and commercial development in a large swath of the neighborhood that’s currently zoned for industrial or automotive uses. Rodriguez predicts it will create 2,600 units of affordable housing, and generate $400 million in investments for parks, education, and tenant legal services, in addition to a form of rent control policy for local businesses. On Wednesday, the City Council will vote on the proposal, and it is expected to pass.

“Above all, I am an advocate of the people, and have the good fortune to be at the Council at this moment in the history in our district,” Rodriguez said at a press conference last Friday. “United in our progressive values, they [the council] have listened and understand our priorities: the need for investment in elevating a community that has been neglected for generations.”

The story of Inwood is similar to that of many working class neighborhoods in New York. Situated at the northernmost tip of Manhattan, it once had the second highest homicide total in the city. In the 17 years leading up to 2010, the crime rate plummeted 83%, and Inwood became one of New York’s safest neighborhoods. With the lower crime levels came other changes. An assessment of the rezoning put together by a group of faculty at City College shows a steady hike in rents in Inwood’s community district since 2010, and a decline in the percent of people of Hispanic origin, from 74% to 68%, followed by an increase in 2016. The report also cites an increase in white residents and a higher median income. 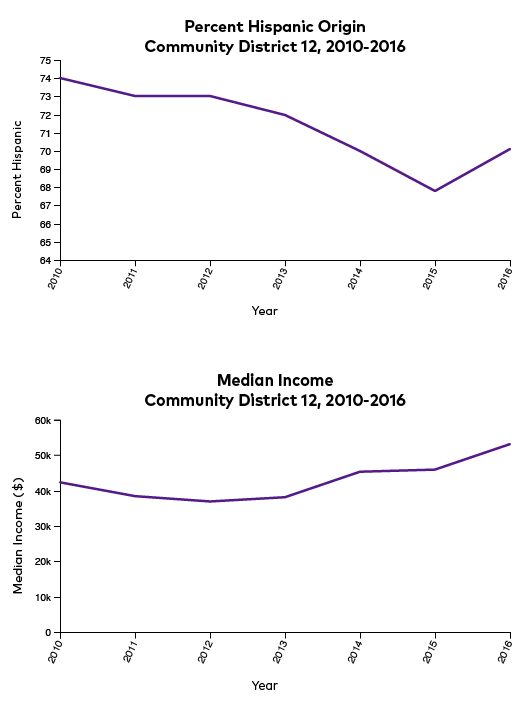 (Gothamist / Data from the Furman Center)

Political science professor John Krinsky was one of the faculty members involved in the City College assessment. He believes that displacement risk from rezoning cannot be calculated without analyzing the behavior of landlords, who are ultimately responsible for raising rents, neglecting their buildings, and initiating eviction proceedings.

“The trouble is that we don't know who is most at risk [of displacement] because the data on what landlords are actually doing, what they paid for buildings, and what their rent rolls are like is very difficult to get,” Krinsky told Gothamist. “And further, nobody is required to do so, under city rules.”

Krinsky says that despite the lack of detailed data, research points to the high risk of displacement faced by tenants living under some Inwood landlords. The Association for Neighborhood and Housing Development (ANHD) publishes annual reports on displacement risk. In them, Community District 12 has consistently been in the top 20 districts with the highest number of housing court cases. However, in 2017, the district was not in the top 20 most rent burdened districts.

“[This] suggests both that landlords may be being extra-aggressive in bringing housing-court litigations against Community District 12 residents and/or that these litigations are targeted at those least able to pay rent,” Krinsky said.

Gothamist mapped each of the 429 evictions carried out in Inwood and the adjacent zip code from 2017 to August 2018. In Inwood’s zip code alone there were 230 evictions, of which 59 were commercial and 174 were residential. Approximately 27.3% of buildings in Inwood had at least one eviction since January 2017. 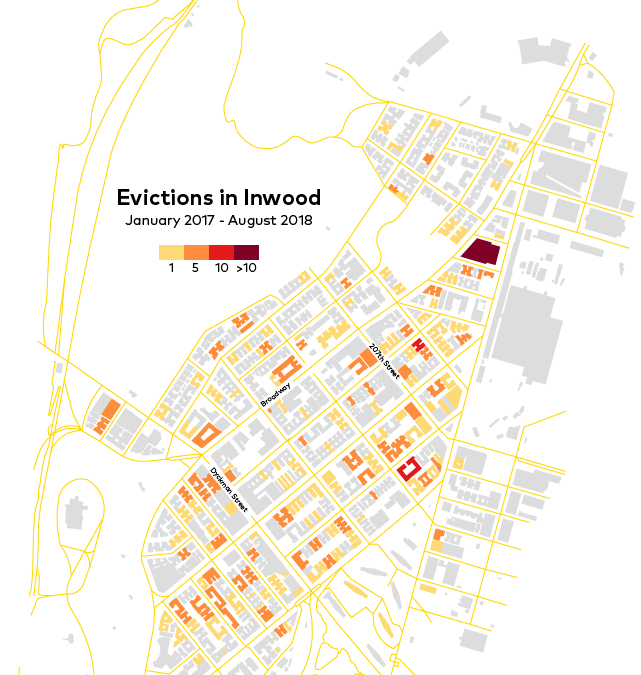 Through additional analysis, Gothamist found that the annual percent increase in commercial property taxes has more than doubled since 2015, from a 3.2% increase to a 8.6% jump. 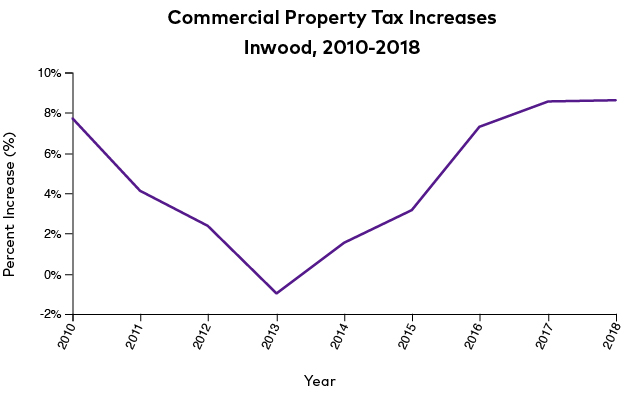 (Gothamist / Data from the Department of Finance)

Minutes before a City Council subcommittee vote on the rezoning proposal last week, Councilmember Rodriguez announced that he was able to support the upzoning because he had wrested concessions from the City, including the elimination of Inwood’s “Commercial U” from the project area. The Commercial U segment, which consists of Dyckman Street, Broadway, and 207th Street, comprises the neighborhood’s principle commercial corridors. After the vote passed and the meeting was adjourned, city officials who had spent the night negotiating details congratulated each other. The Daily News wrote favorably of Rodriguez’s decision, calling it a victory for the community.

When the de Blasio administration first announced that Inwood would become one of the first 8 of 15 neighborhoods slated for rezoning, a group called Northern Manhattan is Not for Sale offered their own recommendations. They were interested in development, but with non-profit developers and deeper affordability.

Graham Ciraulo is a tenant organizer who worked on the alternative rezoning plan. He told Gothamist that in 2017, a private developer put in an application to upzone a site on Sherman Avenue for the construction of a 26-story condominium building. After fierce outcry from the community, the proposal was shot down. Ciraulo said that by choosing not to zone the Commercial U, the City is opening the area up for similar spot up-zonings in the future.

“With this [new] proposal the city is just kicking the can of development down the road,” Graham said. “That’s what’s so infuriating about Rodriguez. He’s saying we did this for the community—no you did not.”

Asked to respond to these charges, Councilmember Rodriguez said in a statement, “I listened to my community at many town halls and meetings. I can say that I’m voting for a rezoning plan that will bolster our community and lift hardworking New Yorkers into the middle class.”

Krinsky, the City College professor, says he is unsure of what the revised rezoning proposal might lead to, but echoed the suggestion of Queens Councilmember Francisco Moya, who asked that a moratorium be placed on rezoning until the City can better understand the risks of displacement.

“While it might seem that these are neighborhoods that capital has forgotten, it is worth remembering that the low-income tenants who stuck it out in East Harlem, Bushwick, and the South Bronx for decades are now fighting to hang on as their neighborhoods become highly gentrified zones,” Krinsky told Gothamist, adding that “many have already left.”

Krinsky said the situation was “disheartening.”

“I don’t know how much longer this can go on until the city is completely unaffordable. I mean, where else can people go?”

The full City Council vote is slated for 1:30 p.m. on Wednesday.

Note on the analysis: Evictions data from the the NYC Open Data Portal. Property Tax Data from the NYC Department of Finance property tax roll archives. Demographics and median rent data from the Furman Center.

#affordable housing
#inwood
#inwood rezoning
#rezoning
#ydanis rodriguez
#original
Do you know the scoop? Comment below or Send us a Tip
A new Gothamist is coming! We’ve moved comments over to our beta site. Click here to join the conversation and get a preview of our new website.