The New York City Planning Commission voted 12-1 today in favor of Mayor de Blasio's controversial rezoning plan for East New York—one that many residents have spent the last year vehemently protesting. The plan's fate will remain undecided until the City Council votes on it this Spring.

East New York is the first of fifteen low-income neighborhoods scheduled to be rezoned as part of Mayor de Blasio's affordable housing plan, which has pledged to create or preserve 200,000 units of affordable housing. The blueprint for rezoning in East New York's Cypress Hills neighborhood and adjacent Ocean Hill in Bed-Stuy calls for the construction of 7,000 new apartments by 2030, plus an additional one million new square feet of commercial space. Of these 7,000 apartments, 3,447 would be designated as affordable.

According to recent analysis by the Community Service Society, the median income in East New York is just $35,000 per year. At a May rally for fair rezoning, 49-year-old Rama Campbell, a lifelong East New York resident, told us that she was already witnessing gentrification's eastward creep.

"It is a transition right now," she said. "Rent is getting crazy. There's no more middle class. Now either you're rich, or you're poor."

In response to opposition from East New York residents, the Mayor's office has recently countered that the "first wave" of affordable housing in the neighborhood would generate 1,200 "100% affordable" apartments over the next two years.

Mayoral spokesman Wiley Norvell also pointed out that any developer receiving an additional HPD subsidy—in his estimation, that means most developers coming to East New York in the first two years of the plan—will be held to stricter affordability standards: at least 40% of the units would have to be set aside for renters who earn between $23,350 and $38,850 per year.

Norvell has also stressed that the displacement many residents predict in East New York is not a "symptom of the rezoning," but, citing Bushwick and Crown Heights as case studies, rather a "byproduct of a very hot housing market" across the borough.

The city also expanded its rezoning plan last summer to include renovations to East New York parks, and a new school with 1,000 seats. De Blasio has also committed $36 million annually to free anti-eviction legal services, which Norvell described as a sort of "proactive 311." 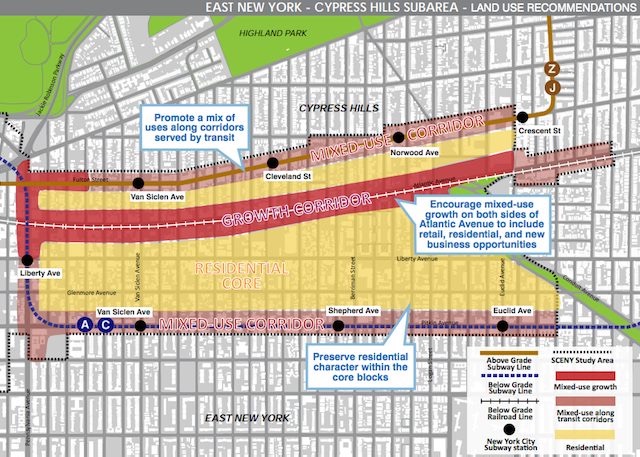 Commissioner Michelle de la Uz, the only dissenting vote on Wednesday, said that experience had made her skeptical. "While I don’t doubt the intentions of this administration, too many promises to communities have been broken in the past, and that leads to cynicism, anger, and antipathy that undermines our democracy and ultimately, the administration's goals," she said.

East New York Councilmember Rafael Espinal told us on Wednesday afternoon that he was not entirely surprised by the CPC's vote (the CPC approved other controversial aspects of Mayor de Blasio's plan earlier this month). "The plan still has two months on the clock and I'm going to make it work," he pledged. Espinal said that he'd like to see deeper affordability, and a commitment from the city to invest more in East New York's Industrial Business Zone. "If we're going to build 3,000 affordable apartments, we should create 3,000 new jobs," he said.

"It was not unexpected, but it was really disappointing," said Cypress Hills Local Development Corporation Director Michelle Neugebauer on Wednesday, of the CPC vote. "[The Commission] has been cordial with us, but the fundamentals of the affordability... nothing has changed on that."

"The City Council is much closer to the ground, and [we hope] they will be much more sympathetic to us, and more advocacy-oriented," she added.

#affordable housing crisis
#east new york
#mayor de blasio
Do you know the scoop? Comment below or Send us a Tip