On January 7th, Weatherproof Garment Company got their money's worth from a billboard they put up in Times Square which featured a photograph of the President in one of their jackets, and received lots of press. It wasn't Photoshopped, Obama actually wore their jacket on a trip to the Great Wall in China, and the company later got the rights to a photograph from that trip. However, they didn't get any sort of blessing from the White House to use Obama's image to hock their product.

By January 8th the company said they would take their billboards down after speaking to the counsel's office, and after White House spokesman Ben LaBolt publicly stated they have "a longstanding policy disapproving the use of the president's name and likeness for commercial purposes."

And this morning, 20 days after it went up, the ad is finally coming down. A reader just sent us this image of the billboard being stripped; anyone in Queens see if the one by the Midtown Tunnel came down?

UPDATE: Just a couple of hours later, and a new ad has already gone up. The tagline: "Fit For A President." 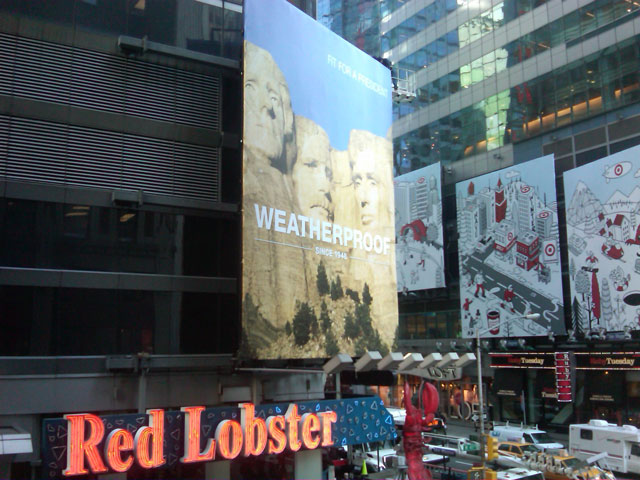 #ad
#billboard
#obama
#Times Square
#Weatherproof
Do you know the scoop? Comment below or Send us a Tip