The city's system for building affordable housing is rife with labor abuses and corruption, and the mayor's goal of having developers build 80,000 more below-market units over the next 19 years runs the risk of perpetuating those problems and leaving behind housing that's out of reach for many current residents, according to a report [pdf] by a coalition of several dozen activist and union groups. Workers with Real Affordability for All walked off the job at an affordable housing construction site at 27 Albany Ave. in Bedford-Stuyvesant on Wednesday afternoon, claiming wage theft and safety violations, and protesters with the group later picketed a gala of the New York State Association for Affordable Housing [NYSAFAH], a lobbying group whose members depend on city cash.

The coalition report singles out NYSAFAH as pushing to loosen oversight and enable worker exploitation, noting $17 million in stolen wages documented and alleged at affordable housing work sites since 2011, by developers and contractors working with the city's blessing and tax breaks. Most of the projects involve NYSAFAH members. Most of the proven thefts predate de Blasio's tenure, but a subcontractor at the 123-unit Sugar Hill development in Harlem was arrested in April and charged with underpaying drywall workers by $800,000 during a period that included a mayoral press conference at the construction site. Those charges are pending. Also, an class-action lawsuit against contractor Joy Construction alleges a decade of wage violations extending into 2014. The company is a big affordable housing developer and currently working on Webster Commons, a five-building, 470-unit project in Norwood, the Bronx.

Many of the corporations previously found to be cheating workers are still getting work from the city.

"In the NYSAFAH model of doing business, construction workers earn poverty wages, risk injury and even death, and can't ever afford to live in the housing they build," the new report says.

The trade group argues that RAFA's insistence on prevailing wages, a rate set by the city comptroller to parallel union rates, would severely cut the number of jobs and housing units that would be created, and Mayor de Blasio is not interested in seeking more city funding to cover it.

"It would appear that this group is being used by the construction unions as a voice for their campaign for an inflated prevailing wage that would raise construction costs and prevent thousands of affordable units from ever being built," NYSAFAH president Jolie Milstein said in a statement through a PR firm.

There is only so much public funding available for affordable housing developments, a spokesman for the trade group said, and prevailing wage requirements would drive up costs 30-40 percent, making carpenter's wages, for example, go from around $31 an hour to $45 or higher, and putting the mayor's construction goal out of reach. The spokesman noted that negotiations between construction unions and the Real Estate Board of New York on whether to mandate a prevailing wage in the renewed 421-a tax break are ongoing.

De Blasio's housing plan is a variation on former mayor Bloomberg's trademark tactic of rezoning neighborhoods to add density and offering tax breaks for developers to include some housing for people of certain incomes. De Blasio is making the affordable component a requirement in target neighborhoods such as East New York, and instead of Bloomberg's suggested 80/20 market-rate-subsidized split, de Blasio wants 25 or 30 percent below-market rate apartments.

Real Affordability for All [RAFA] argues in a previous report [pdf] there is "an apparent surplus" of housing for people making half to all of the area median income, which is $83,000 for a family of four, thanks to Bloomberg's policies. That leaves a severe shortage for people making less, which would continue under de Blasio's proposed scheme, the authors argue.

The mayor's system gives developers the option of including a quarter of a building's apartments for people making 60 percent of the median income, or $52,000 for a family of four, or 30 percent making 80 percent, or in what de Blasio says will be limited, un-subsidized cases, 30 percent making 120 percent, or $104,000.

Mayor's Office spokesman Wiley Norvell said that 84 percent of housing built and kept affordably designated so far has been for "low-income" New Yorkers, or those making less than 80 percent of the median income.

"We set a record this past year for new affordable housing underway," he said. "We've committed to ensuring 50 percent of all new housing in East New York is affordable. This is an agenda that will make a deep and substantial impact to improve the lives of New Yorkers."

De Blasio has said that critics of his housing plan want poor neighborhoods "to remain poor."

As wages have stagnated and rent in subsidized buildings climbed, even some residents of recently built below-market complexes are struggling to pay their rent, the report says. Of 111 residents "randomly" surveyed at 16 below-market developments, more than a third were paying more than 30 percent of their income on rent, making them officially "rent-burdened."

"Our report reveals a clear bait and switch that NYSAFAH developers regularly perform with low-income tenants in their buildings: after initially offering apartments at low rents to qualify for subsidies and other financing from the city, they often raise the rent to unaffordable levels," a coalition spokesman said. "NYSAFAH is cheating tenants, workers, and communities. End of story."

An airport worker the Daily News spoke to said she was struggling to pay her $600 rent in a subsidized building on her $316 paycheck. The NYSAFAH spokesman noted that many construction union members live solidly middle class lives in suburban Long Island and New Jersey, and suggested RAFA selectively presents hard cases to push its agenda.

Part of what the report says enables rampant, recurrent wage theft on affordable housing construction sites, including withheld overtime and even minimum wage violations, is dependence on subcontractors that are unaccounted for by the city. In one example cited, at the Hobbs Court and Ciena mixed-income development in East Harlem, the Department of Labor found that contractor Lettire Construction and 16 of its 24 subcontractors were ripping off workers, of $1 million altogether. Lettire is on the city Department of Housing Preservation and Development's "Enhanced Review" list, meaning only that it is subjected to additional scrutiny when bidding on city affordable housing projects. Lettire is currently contractor on the 23-story tower rising at 626 Flatbush Avenue in Prospect Lefferts Gardens, Brooklyn with the help of a 421-a tax abatement. 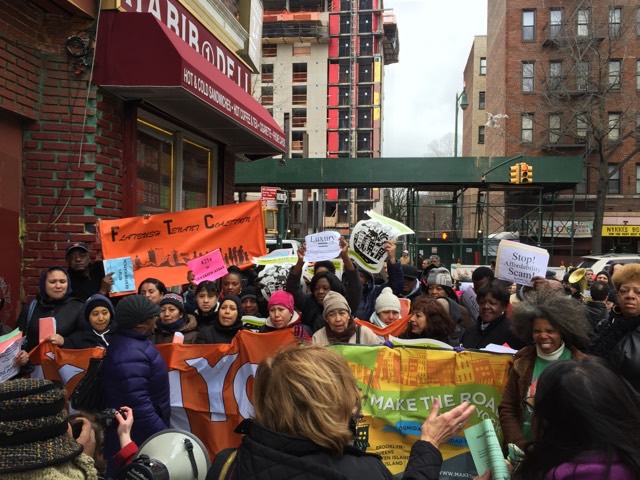 Also in activists' sights are companies owned by Thomas Auringer, which have experienced a crane collapse and faced numerous claims of safety and wage violations. One Jamaican employee of Auringer's of more than a decade, Carrol Turner, claimed Auringer family members called him "a donkey" and "nigger," and said his boss once declared he could "afford to lose twenty five black or Hispanics because we are easy to replace but he can't afford to lose one white man."

Turner also said that no safety equipment was provided on job sites, and no lenience was given to workers who suffered injuries.

"When I broke my finger and got it crushed, [Auringer] told my foreman, 'Tell Turner he can cut off his finger and sue me, but if he doesn't come back to work he will be fired. He will be out of a job,'" Turner said, according to the report.

Turner is on strike from Auringer's U.S. Crane and Rigging along with another worker, and is part of a class action lawsuit by current and former Auringer employees claiming wage theft, according to an RAFA spokesman. Another striking Auringer worker, LaFondra Brown of the company Urban Erectors, claims managers stole her wages, called her a monkey, spat at her, and sexually harassed her, and that she suffered eye injuries welding but the company did not file an OSHA claim for her.

Activists say Auringer companies have worked on more than 30 HPD affordable housing sites. The claim could not immediately be independently verified.

An HPD rep did not dispute the coalition's assertion that the agency only monitors the 10 percent of affordable housing job sites where contractors are paying prevailing wages, but said instances of noncompliance are referred to law enforcement. Spokeswoman Elizabeth Rohlfing offered general assurances about the agency's enforcement efforts, but nothing to suggest that it's trying to keep the Auringers from collecting city money, for instance.

"HPD takes seriously its responsibility to protect workers," she said. "The agency requires contractors to obey all labor laws and have instituted strong measures to deal with noncompliance. Anyone who shortchanges their workers will be held accountable."

Milstein, the NYSAFAH president, emphasized the political backdrop of unions' fight to include a prevailing wage requirement in the affordable housing initiative, saying the report is poorly researched propaganda.

"Unlike RAFA, NYSAFAH is not interested in engaging in political posturing," she said in a statement. "We remain focused on how the city can build more safe, quality affordable housing for hardworking families and vulnerable populations."

U.S. Crane and Rigging did not immediately return an email seeking comment.

HPD would like people to know it has recovered $5 million in stolen wages since 2010.

#affordable housing plan
#bill de blasio
#HPD
#real affordability for all
#wage theft
#workplace safety
#original
Do you know the scoop? Comment below or Send us a Tip