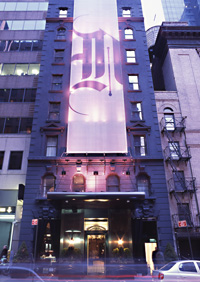 A 21-year-old woman visiting New York City from a small town in Minnesota killed herself Friday evening by jumping from the fire escape of a midtown hotel. The suicide ended a weekend that was the result of winning tickets to Friday night's Z100 Jingle Ball concert at Madison Square Garden. Jennifer Olson was from the town of Eveleth, Minnesota, population: 3,000. She checked into the Night Hotel on 45th St. with her male friend Timothy O'Neill. The two were co-workers at a dental office in Eveleth and O'Neill apparently had a romantic interest in Olson, which was not reciprocal. Nonetheless, she accepted his invitation to go to NYC with him after he won tickets to the concert.

A patron at the nearby bar The Perfect Pint saw the two of them drinking before the show. She was described as being friendly and nice, but that O'Neill seemed annoyed that she was talking to other people rather than paying attention to him. The pair got into an argument when O'Neill reportedly suggested skipping the concert and going to another bar instead. The argument apparently continued after they returned to their room at the Night Hotel, which is when she stepped out onto the fire escape and jumped. The 60 foot fall proved fatal after she landed on a concrete ledge below.

According to the Daily News, Eveleth, MN is nearly 200 miles north of the Twin Cities and was the setting for the Charlize Theron film "North Country," which was about sexual harassment at a mining facility.