Construction Regulation May Be Further Reinforced 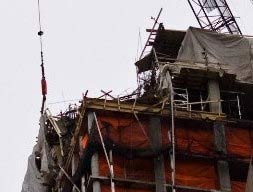 After a year of widely publicized construction site deaths, New York City's Buildings Dept. is working to tighten up some work rules that may have fallen by the wayside or are no longer sufficient. DOB Commissioner Patricia Lancaster wants new rules and a strengthening of the enforcement of work licenses for contractors and concrete operators.

Given the pace of construction in NYC over the past few years, three deaths since 2006 related to concrete construction seems statistically insignificant, but they are still tragic, preventable, and disruptive to the city. The latest death was that of Yuriy Vanchytskyy, who fell 42 stories after forms collapsed while concrete was being poured at the Trump SoHo Hotel. Substandard construction conditions are suspected in Vanchytskyy's death.

Since 2006, more than 60% of instances of things falling from sites involved concrete. DOB commissioner Patricia Lancaster is calling for a greater presence of on-site DOB inspectors and for contractors/operators to register their projects (the projects weren't registered before?!?). City Council Speaker Christine Quinn agrees, but also wants more regulation at smaller construction sites. The new regulations were formed with the support of Raymond McGuire, managing director of the Contractors Association of Greater New York, a trade group who helped form the proposed rules.