Liberal, immigrant-heavy New York has always been something of a conservative boogeyman. And now with Mayor de Blasio as one of the most visible liberal leaders in the country picking fights with the incoming Trump administration, it's no surprise that conservative commentators want to make his leadership of the city a symbol for the failures of liberalism nationwide. That still barely explains what Laura Ingraham, a conservative commentator who almost became Trump's press secretary, was thinking when she took a picture of a bottle on a clean sidewalk as proof that New York was filthy and full of vagrants. 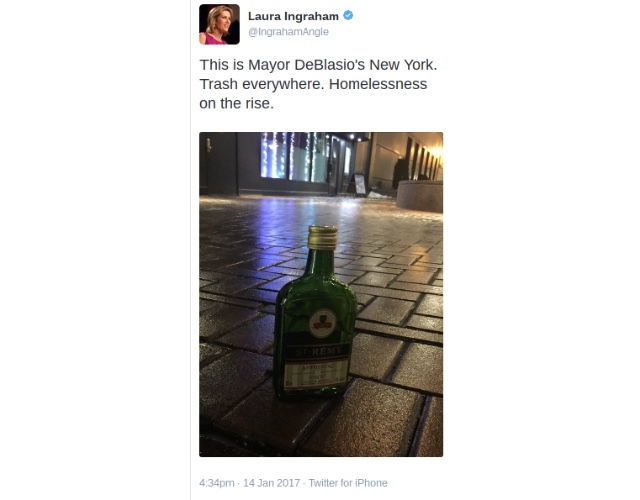 "This is Mayor DeBlasio's New York. Trash Everywhere. Homelessness on the rise," Ingraham was compelled to tweet after she found an empty bottle of VSOP brandy on a sidewalk that was otherwise so clean it didn't even have any snow on it. It was a truly weird piece of performative outrage, and it also raised an important question:

Lol did she get down on the ground to take this riveting photo https://t.co/FWY5OSblax

People were quick to seize on how weird it was to use a single random bottle on the sidewalk was proof of the city's decline:

*gets down on all fours to snap pic of discarded bottle on soho sidewalk* this city is full of depraved people https://t.co/DxGpJC0Jnm

This is Mayor DeBlasio's New York. Trash everywhere. Homelessness on the rise. pic.twitter.com/aMbsZHVEAk

This is Mayor DeBlasio's New York. Trash everywhere. Homelessness on the rise. pic.twitter.com/H5ufvApCDE

@IngrahamAngle The green markets are disgusting and unsafe for children, and it's only getting worse. pic.twitter.com/0mASDz3g9E

This is Mayor DeBlasio's New York. Graffiti everywhere. Dads on the rise. pic.twitter.com/jKHAmJb3pj

Pick up the bottle moron https://t.co/Bqu47WXuSr

Ingraham was owned so hard for her bad tweet that she's since locked her account. It brings to mind the story of another visitor to the city whose big ideas about owning it led them to nothing but trouble:

#de blasio's new york (appears quite nice)
#laura ingraham
#pictures of garbage
Do you know the scoop? Comment below or Send us a Tip