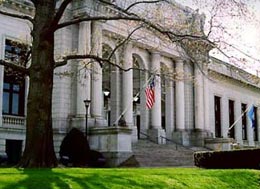 The highest court in Connecticut ruled 4-3 in favor of gay marriage. The majority opinion found the state's "understanding of marriage must yield to a more contemporary appreciation of the rights entitled to constitutional protection." Connecticut is the third state to allow same-sex marriages (it's allowed in Masachusetts and California).

Governor Jodi Rell, who did sign a civil union law in 2005, said she would abide the ruling, "The Supreme Court has spoken. I do not believe their voice reflects the majority of the people of Connecticut. However, I am also firmly convinced that attempts to reverse this decision -- either legislatively or by amending the state Constitution -- will not meet with success."

The majority ruling also read, "Interpreting our state constitutional provisions in accordance with firmly established equal protection principles leads inevitably to the conclusion that gay persons are entitled to marry the otherwise qualified same sex partner of their choice. To decide otherwise would require us to apply one set of constitutional principles to gay persons and another to all others."

The NY State Appellate Court rejected gay marriage in 2006, but earlier this year Governor Paterson said the state would recognize out-of-state gay marriages. Here's the Connecticut Department of Health's info on marriage licenses (which could be updated, given the ruling) and the MTA's schedule for Metro-North.