Congressman Disappeared Into Bar Bathroom With A Lady But Totally Not For Sex, Source Says

Are you sitting down? (Preferably on the toilet?) A Staten Island congressman may have had sex in the bathroom of a Bay Ridge wine bar, a source tells Brooklyn Magazine. Other sources (Viane Delgado?) tell the NY Post that the elected official, who is single, was in the bathroom with an unidentified woman for 17 heavenly minutes. ("Dude, I think he was in there having sex.") But still another source says NO WAY they did not haz sex or drugz, the congressman just entered the bathroom to "check on her." Because he is a gentleman, there was "absolutely no sex." Got it? No sex, just check.

For the utterly inane record, a spokesperson for Republican Representative Michael Grimm assures the Post, "This never happened, and I will not dignify this absurd distortion of the facts with a response, except to to say that this is nothing more than a typical Democrat-led smear campaign." Yup, setting up Republicans with embarrassing bathroom scandals is straight out of the Democrat's playbook.

Politicker assigned two reporters to cover the, uh, story, and one scored a photo of the bathroom in question; check it out below, it's located in The Owl’s Head wine bar. The owner says he doesn't know nothing about no politically-charged bathroom sex, but come on, just look at that bathroom. It's "gender-neutral," it's got a sexy mirror, and we're supposed to believe those metal handles are just for handicap customers? The Owl's Head should be renting out that restroom out by the hour, an oddly aroused source inside my head tells me. 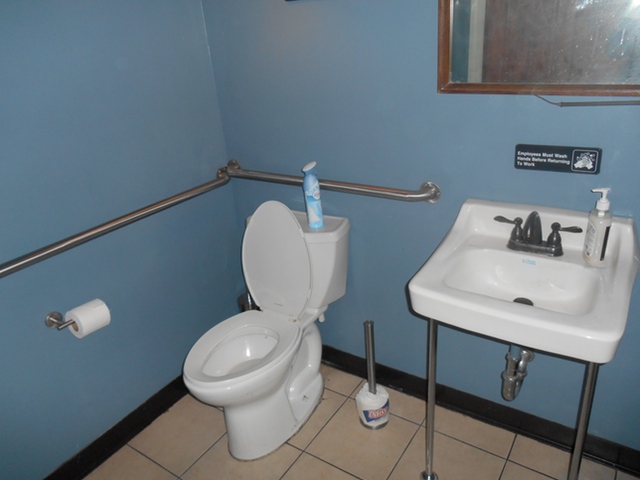 In one of the most dramatic examples, the comptroller’s report found a nearly 47% vacancy rate in the city’s Department of Social Services’ Child Support Services division, which administers programs that impact one in seven New Yorkers under 18.

Prospect Park's magnolia trees are budding in December. Here's why.

By
Catalina Gonella
Prospect Park's magnolia trees are budding in December. Here's why.

By
Catalina Gonella
Murders, shootings down in NYC since 2021, but other crimes rose sharply, per police data
By
Rebecca Redelmeier
New survey highlights NYC Asian voices that favor school integration
By
Arun Venugopal
Extra Extra: The guy who invented the modern bulletproof vest shot himself in the chest ... a lot
By
James Ramsay
Get the news New Yorkers need in your inbox