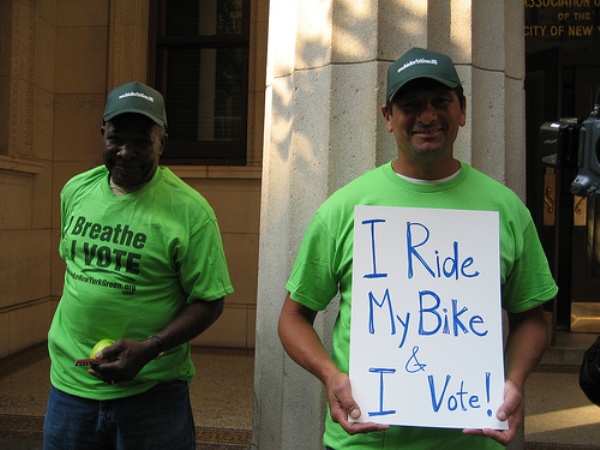 As the clock is counting down the time Albany has to approve Mayor Bloomberg's ambitious - and controversial - congestion pricing plan in order to qualify for $500 million in federal funding, Westchester Assemblyman Richard Brodsky is getting ready to explain why Albany shouldn't. He is releasing a report that calls congestion pricing "un-enactable". He suggests that the Mayor's plan is very different from what's before the Legislature. From the NY Sun:

While Mr. Bloomberg has assured Manhattan vehicle owners that they would likely not pay to move their cars within the tolled zone to comply with alternateside parking rules, Mr. Brodsky charges that such an exemption is not in the bill. The legislation also doesn't identify locations or standards for residential parking permits that have been put forward as a possibility for neighborhoods surrounding the tolled zone.

While Mr. Bloomberg has said the funds collected from charging drivers in Manhattan would be used to fund capital improvements to the mass transit system, Mr. Brodsky said, "That's not in the bill."

Brodsky also questions whether the city has "mass transit improvements" in place to handle more riders and whether traffic flow would improve. He offers a "congestion rationing" plan, which, per the Sun, involved "certain license plates [being] allowed to drive at designated times." And, according to the Daily News, Brodsky's study will show that Brooklyn, Queens, and Bronx drivers, with an average salary of $46,000 will make 24% of the trips, but pay 47% of the fines, while Manhattan drivers, with $74,000 in average salary, will make 72% of the trips but pay only 42% of the fees.

Over the weekend, Mayor Bloomberg said, "It's imperative that our State leaders put aside their competing interests and come together on this issue. To leave this half a billion dollars just sitting on the table would be absolutely ridiculous." And there are dueling congestion pricing press events: At 1PM, Bloomberg is detailing mass transit benefits and then at 2PM, Brodsky releases his report.