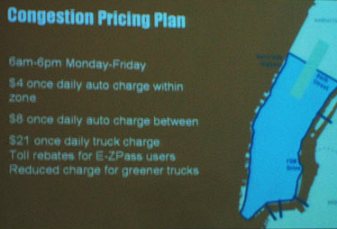 Something is happening with congestion pricing in Albany, but we're not exactly sure what. It's not put-a-fork-in-it dead yet, but it might be close to it. Or not!

WCBS said the plan was "dealt [a] crippling blow", but Spitzer's staff is looking to create a commission that would give Albany the power to scale the plan back. The Daily News said that Assembly Leader Sheldon Silver won't bring his members back to vote on it on Monday, when the federal deadline on $537 million in potential funds will expire. However, Silver is open to bringing members back later in the week.

NY1's "the Assembly is stalling on the plan" story has this Silver quote: "I believe the real solution is that everybody put their heads together, take everything that has been submitted and probably future statements, future testimony, future experts and put together a plan that deals with congestion, that deals with the environment." Mayor Bloomberg is planning on going to Albany on Monday to make a last appeal (half a billion in federal money is nothing to sneeze at), though some wonder why he's not in Albany right now. 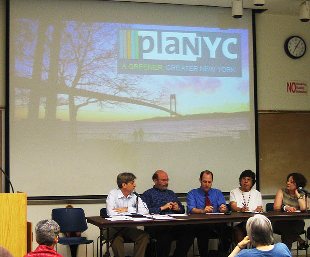 We attended Community Board 7's Transportation Committee meeting last night, where Bruce Schaller, the Deputy Commissioner of Planning and Sustainability (a position created for him), gave a presentation about the congestion pricing component of PlaNYC. Certainly, the concerns of the residents who attended the meeting included questions about why the zone starts at 86th Street, in a residential neighborhood, and why would reverse-commuters be penalized. In fact, one woman gave a passionate speech, noting that her drive to Connecticut was miserable and hideous and she did not wish it upon anyone, but her office is miles from the train station leaving her no choice but to drive.

There was also some skepticism about whether the revenue generated from congestion pricing would actually go to NYC mass transit improvements, versus state groups trying to take a cut of it. Schaller and other DOT representatives said that the congestion pricing revenue would go in a "lockbox" and that legislation would mandate that funding be used for NYC transit projects and road improvements.

Schaller said that the goal is to have Legislature pass the concept of congestion pricing so the city can qualify for federal funding and that details, like the 86th Street border and possible exemptions for reverse commuters, could be worked out later. Which we hadn't quite realized before, because most of the attention has been on the plan as is. CB 7 members were vocal about the border moving to 60th Street, where the Central Business District begins; CB 7 covers the West Side between 60th and 110th Streets. As for timing of the project, Schaller said the hope is to get congestion pricing started in the first or second quarter of 2009, with the city and other agencies (like the MTA) would spend the time leading up to it to get ready.