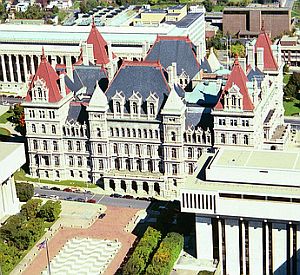 Democratic lawmakers in Albany seem poised to block Mayor Bloomberg’s congestion pricing plan, which attempts to reduce traffic by charging drivers $8 to enter Manhattan below 60th Street during peak hours. Though the plan was approved by the City Council on Monday, a “lively, sometimes emotional” meeting between state lawmakers yesterday ran over three and a half hours, and approximately 30 of them expressed opposition to the plan, with only four or five in favor.

“I think it’s going down,” Queens assemblyman Anthony S. Seminerio told the Times. “There are too many unanswered questions.” Assemblyman Daniel J. O’Donnell, who represents the Upper West Side and opposes the plan, said “This is Albany, and nothing is dead until it’s dead, dead. [But] it doesn’t look good.” Assembly member Ruben Diaz explained that he opposes the plan because “It’s just a bad approach where working class citizens of the city of New York are going to wind up having to pay either $8 or eventually a fare increase.”

The Legislature must approve the plan before Monday in order for the city to qualify for $354 million of federal funding. All eyes are Assemblyman Sheldon Silver, who previously stymied Bloomberg’s plan for a stadium on the West Side. Thus far Silver has been noncommittal on congestion pricing, and his support is crucial to bring the bill to the floor.

Bloomberg has been pushing for the plan to be included in the state budget, which is now three days late, but Silver wants congestion pricing to be in a separate bill with its own vote. According to the Times, some Democrats are accusing Republican senate majority leader Joseph L. Bruno of stalling final action on the $124 billion budget so Bloomberg can keep trying to corral support for the congestion traffic pricing plan.

#Albany
#bruno
#City Council
#congestion pricing
#mayor bloomberg
#opposition
#silver
#vote
Do you know the scoop? Comment below or Send us a Tip