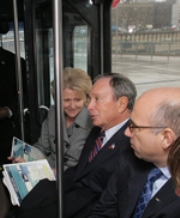 "[Do you trust the MTA]...the council members who support congestion pricing do. Every dollar in fees goes to the MTA. As for the promise that funds will only go for improvements, the MTA admits that 67% will be spent on everything BUT new bus and subway lines. Also, the MTA just canceled new improvements promised when fares were raised. Don't trust the MTA and call your council member and tell them not to trust them either."

The MTA would be a beneficiary of congestion pricing revenue, but a recent poll suggested New Yorkers doubt mass transit will actually get better.

The Daily News and Newsday have editorials supporting congestion pricing; the News' even lists all the common myths about the plan. And presidential candidate Barack Obama likes congestion pricing (if only because he can call Mayor Bloomberg "thoughtful" and "innovative"!).

#congestion pricing
#federal money
#mayor bloomberg
#robocall
Do you know the scoop? Comment below or Send us a Tip