Congestion Pricing Gets Its 17-Member Panel 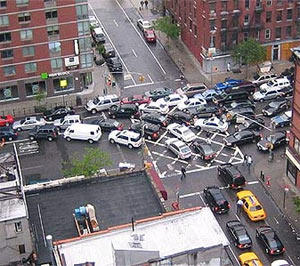 As part of the deal to advance congestion pricing (and nab the $354 million the feds are offering), the city and state have announced their appointees to a panel to, ur, study congestion pricing and develop a recommendation. The Mayor, Governor, City Council, State Senate Majority Leader, and State Assembly Speaker each get to select three appointees, while the Senate minority leader and Assembly minority leader each select one.

Mayor Bloomberg said, "Today we are continuing to move forward and work with our partners in State government and in the Council to relieve congestion in New York City. Together, we’ll reduce traffic, improve New Yorkers’ health and strengthen the City’s economy.”

Here are the picks:

The Sun says that most of the members support Mayor Bloomberg's congestion pricing goals, though one extremely vocal opponent is Assemblyman Brodsky of Westchester. The NY Times spoke to Spitzer appointee Shaw, who was named the head of the commission and expressed support for congestion pricing, "The role that I think I’m being asked to do is to figure out how to use the commission to end up with a process where you deal with all the issues that people have out there to get to a solution that works for everybody."

But the panel may have gotten off to a bad start: Staten Island politicians are upset that there were no appointees who lives or represent the borough. City Councilman James Oddo said, "Can you imagine Manhattan not being represented? Can you imagine the [former Mayor Rudolph] Giuliani administration creating a 17-member commission of whatever that didn't include a Staten Islander?"