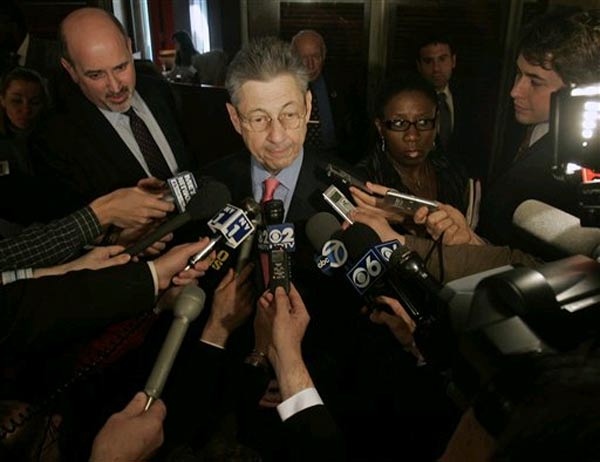 Mayor Bloomberg didn't appear in public after Assembly Leader Sheldon put a nail in congestion pricing's coffin. But Bloomberg did issue an angry press release. The full text is after the jump (and he does thank many politicians who helped), but here's where he lets loose, after noting that while Washington D.C. was willing to give NYC $354 in federal funding, the State Assembly lacked leadership and courage in accepting new ideas:

"If that wasn't shameful enough, it takes a special type of cowardice for elected officials to refuse to stand up and vote their conscience- on an issue that has been debated, and amended significantly to resolve many outstanding issues, for more than a year. Every New Yorker has a right to know if the person they send to Albany was for or against better transit and cleaner air. People know where I stood, and where members of the City Council stood. They deserved at least that from Albany."

Yes, the question of whether a vote should have been held (Silver claimed there wasn't enough support for a vote) will be brought up again and again. But now, as the Sun says, the relationship between Bloomberg and state lawmakers is "in tatters."

The Post called congestion pricing's defeat another "painful civics lesson" from Silver to Bloomberg, though it was less personal than voting down the West Side Stadium. The NY Times reports many lawmakers felt the Bloomberg administration's strategy and tactics were "high-handed" because no one likes being shamed into doing anything.

The Sun notes that with this failure, Bloomberg's "duck is looking a bit lame," and what with the slowing economy. The Daily News' Michael Daly says, "So much for democracy" and lists some interesting Silver inconsistencies. The NY Times editorial, "Mr. Silver Does it Again," points out, "Rarely does one man have a chance to do so much harm to so many...He failed to put New Yorkers’ needs before his personal agenda. That makes him unworthy of his office." And a Newsday editorial says "The cynicism and dysfunction of Albany have reached new depths."

Mayor Bloomberg's statement "on the failure of the State Legislature to vote congestion pricing":

"Today is a sad day for New Yorkers and a sad day for New York City. Not only won't we see the realization of a plan that would have cut traffic, spurred our economy, reduced pollution and improved public health, we will also lose out on nearly $500 million annually for mass transit improvements and $354 million in immediate federal funds.

"I will be speaking with Secretary Peters and will express my thanks for her commitment to innovative solutions to real problems facing large cities today. I will also express my deep disappointment that, sadly, even Washington, which most Americans agree is completely dysfunctional, is more willing to try new approaches to longstanding problems than our elected officials in the State Assembly. It takes true leadership and courage to embrace new concepts and ideas and to be willing to try something. Unfortunately, both are lacking in the Assembly today.

"If that wasn't shameful enough, it takes a special type of cowardice for elected officials to refuse to stand up and vote their conscience- on an issue that has been debated, and amended significantly to resolve many outstanding issues, for more than a year. Every New Yorker has a right to know if the person they send to Albany was for or against better transit and cleaner air. People know where I stood, and where members of the City Council stood. They deserved at least that from Albany.

"The idea for congestion pricing didn't start in our Administration and it won't end today. The $354 million we would have received from Washington tomorrow will go to another city in another state. But the problems congestion pricing could have helped solve are only going to get worse. And too many people from more than 170 environmental, labor, public health and business organizations recognize the merits of congestion pricing and hopefully someday, we will have more leaders in the Legislature who recognize it too.

"We will continue to push forward on the other 126 proposals in PlaNYC that will reduce our carbon footprint and green our City. We will move forward on proposals to plant 1 million trees, introduce hybrid taxis and install green roofs on City buildings. Congestion pricing is just one part of our ambitious agenda.

"I want to thank everyone who has worked tirelessly for congestion pricing and I want to acknowledge the courage and leadership that our partners in the City Council, Speaker Quinn, Governor Paterson, former Governor Spitzer, Senate Majority Leader Joe Bruno, Assembly Minority Leader Jim Tedisco and some in the Legislature have shown by working together to convince their colleagues to support congestion pricing. Together, we will continue to work to build a greener, greater New York City."

And here's a look back at April 23, 2007, when Mayor Bloomberg he wanted to pursue congestion pricing.

#Assembly Leader Silver
#congestion pricing
#mayor bloomberg
#nyc
#sheldon silver
#traffic
Do you know the scoop? Comment below or Send us a Tip
A new Gothamist is coming! We’ve moved comments over to our beta site. Click here to join the conversation and get a preview of our new website.