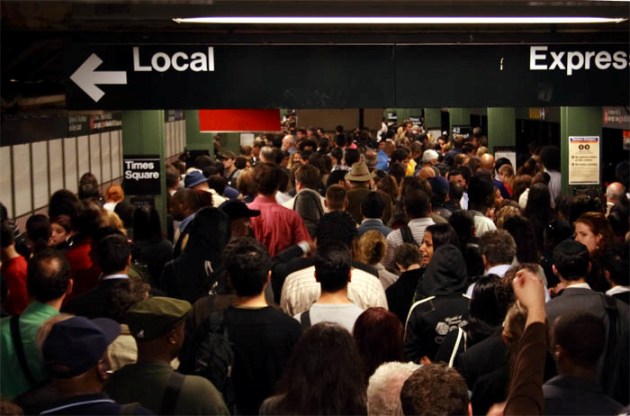 Photograph of the crowd waiting for a 1, 2 or 3 train at Times Square by ianqui on Flickr

New data supports what everyone's been thinking: Ridership for the subway--and almost every other mass transit option--is up versus last year. So far, subway ridership is up almost 5% for the first three months of 2008 versus same period last year, and bus ridership is up 1.1%.

Metro-North and LIRR both have seen ridership increases of more than 5%, and many riders pointing to gas prices as why they are taking mass transit. A construction worker who lives in Long Island told the Daily News, "Gas prices are ridiculous - that's why I'm on the train. It's faster, less expensive and less wear and tear on my car."

Another interesting stat: The number of drivers going across/through MTA and Port Authority bridges and tunnels has declined 1.5-1.9&. Question: Would congestion pricing have had a fighting chance if it were up for discussion after a long summer of high gas prices?

#congestion pricing
#gas prices
#mass transit
#subway
#subway ridership
Do you know the scoop? Comment below or Send us a Tip
A new Gothamist is coming! We’ve moved comments over to our beta site. Click here to join the conversation and get a preview of our new website.