Confirming last week's report in the Times, New York City Football Club and the Yankees announced this morning that Yankee Stadium will be the team's home for the foreseeable future.

For each of NYC FC home game (currently, MLS teams host 17 home games a year), the field will be converted into a soccer stadium. The grandstand and terrace levels will be closed for most soccer matches, reducing the stadium's capacity to 33,444.

The field conversion from baseball to soccer (or back) takes three days, or two and a half in a pinch. While the team had strived to avoid touching the pitcher's mound, they will be forced to do something about it during the conversion. A platform will be built under the mound, and the whole thing will be lifted up and stored as part of the field conversions. (The San Francisco Giants employ a similar mechanism.)

As for the playing surface, it will clock in at the FIFA minimum: 110 yards long, 70 yards wide. Coach Jason Kreis dismissed concerns that the dimensions would impact his team's desire to play free-flowing possession soccer. "Seventy yards wide is typically in a lot of places. For me, that's a comfortable width. When I was told this was going to be 70 yards wide, I was a very very happy man."

If one thing was clear, it's that Yankee Stadium will remain Yankee Stadium. "That's the venue, that's the name. Yankee Stadium was, has been, will always be Yankee Stadium," opened Yankees COO Lonn Trott. Randy Levine was equally clear: "Before we made this decision, we sat down with all the officials, including the commissioner at MLS, we told them obviously just as we say for every event: the Yankees are the primary tenant. This is a baseball stadium. We're going to do this, but everybody has to understand that the scheduling revolves around the Yankees, and we're all work together in the most cooperative way. And everybody was completely on board. I don't anticipate many problems."

While Levine is confident with their theory, there remain open questions about how this will work in practice. The MLS schedule starts in March and runs through October, with playoffs in November. The overlap with MLB is high, with April through September regular season games and playoffs in October. While no one would speak to specifics, it would seem that NYC FC might not be able to play any home games in October for as long as they are tenants at Yankee Stadium. And we don't even want to consider what rainouts might do to the schedule.

There was no explicitly time frame put on the arrangement; the deal will last as short (or as long) as necessary. "We don't have any time limit on this," said Levine. "This is going to be the home of New York City Football Club until there is another home."

By sheer coincidence, today also marked the first time NYC FC fans can put down a deposit on season tickets. The deposits range from $30 for supporters section tickets to $200 for club-level seats, and reserve a spot for later seat selection. Full ticket prices and stadium zoning has yet to be announced, but per Tim Pernetti will be revealed this summer. (Note: Season tickets are non-refundable!)

And the team's first season ticket holder? None other than Mo Rivera! 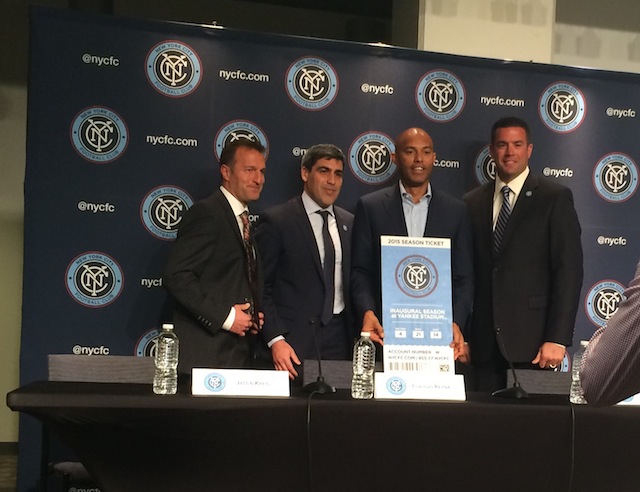 Rivera claimed that if he was still playing, he wouldn't be worried about the mound being moved routinely. While Rivera's a definite sports legend, his presence felt like a deflection of the announcement—Randy Levine joked that he had been training with Claudio Reyna and would be the team's first striker. Hilarious!

You can watch the full announcement below:

#nyc fc
#soccer
#yankee stadium
#Yankees
#original
Do you know the scoop? Comment below or Send us a Tip