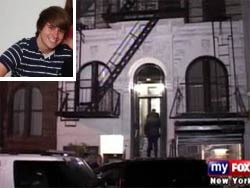 The police are looking into a number of calls that Kevin Pravia made Saturday morning before his death. The Pace University student's body was found, with an electrical cord around his neck and plastic stuffed in his mouth, in his West 15th Street apartment by his roommate on Sunday.

The Daily News says that Pravia was described as "very drunk" when leaving a party in lower Manhattan. Evan Santoro said, "Someone helped him to a taxi and gave him cab fare. Nobody heard from him again." Investigators say that Pravia's laptop and cellphone were not in the apartment, but since roommate Josephine Madonna's jewelry was still in the apartment, police do not think robbery was a motive. Madonna, who went away for the weekend, returned to discover the apartment door unlocked and, in his room, Pravia under a sheet in his t-shirt and underwear.

It's still unclear whether his death will be ruled a homicide. The Post reports that the ME's office "found yesterday that there were no marks or bruises on his neck that would indicate he had been strangled." (Another Post source says that Pravia was "very promiscuous" but the Post adds "there were no signs he'd had sex the night he died.")

UPDATE: A man that was being questioned by the police has confessed to killing Pravia. The Post reports that the suspect, a 22-year-old Queens man said he met up with Pravia and went back to Pravia's apartment. He also calimed "he bought drugs from Pravia before they went to the apartment - though police sources said they doubt the drug buy claim," but the Daily News describes the suspect as a drug pusher. At Pravia's apartment, he "punched the sleeping teen, put an electrical cord around his neck, stuffed a plastic bag in his mouth and strangled him, and then left with Pravia's cell, iPod, and laptop, which he sold on the street.

#Chelsea
#death
#Kevin Pravia
#pace university
#West 15th Street
Do you know the scoop? Comment below or Send us a Tip