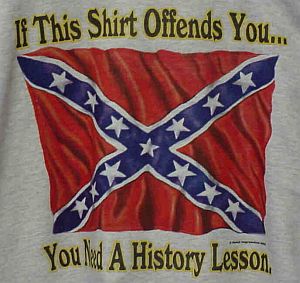 Staten Island may be south of Manhattan, but it’s still not so far south that you can get away with wearing a Confederate flag T-shirt without some people getting offended. According to the Staten Island Advance, 12-year-old Shaun Hines has had to endure a lot of name-calling because of his decision to repeatedly wear his Confederate flag T-shirt around school. The school's administrators don’t have a problem with the shirt, but apparently some of his classmates have interpreted it as kind of racist.

So Hines has appealed to school officials to discipline his tormentors, who have taken to calling him ‘KKK’ and scrawling the letters on his personal items. The seventh-grader insists he isn’t racist, he’s just a history buff:

I just wear it because it's my favorite era in the war, and I always go to Gettysburg, and I love it. I just think it's a flag. I know what it stands for, but it's just a flag that the Southerners use. The South and what they did is wrong, but you can't take it out on a kid because they wear it.

Furthermore, Hines says that the kids calling him KKK don’t get that he’s Jewish, so how could he be involved with that anti-Semitic group? “If I was KKK, I'd have to kill myself,” he tells the Advance. And if other students come in wearing T-shirts with swastikas, he says he wouldn't mind.

The city’s Department of Education says that administrators are allowed to ban “disruptive” clothing with gang colors, but it seems the Confederate flag doesn’t quite rise to the level of disruptive. And Hines’s mother is outraged the school hasn’t taken action against her son’s critics – whom he describes as his black classmates – because all the abuse has “severely affected his grades.”

#confederate
#flag
#Hines
#KKK
#school
#shirt
#south
#staten island
#t-shirt
Do you know the scoop? Comment below or Send us a Tip