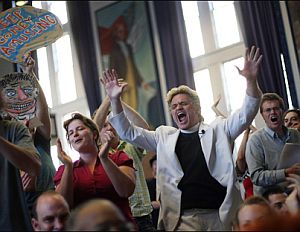 Last night’s Coney Island Public Scoping Meeting was the place to be, as activists like political performance artist Reverend Billy turned the meeting into a carnival, leaping up on a chair with repeated cries of “Coney-lujah!” Musician Amos Wengler stood up to croon his anthem “Save Coney Island,” and Savitri D., the Mermaid Parade queen who had been on a hunger strike since Saturday to spotlight the meeting, passionately derided the city’s latest proposal for Coney Island.

Critics object to the city’s plans to take over the amusement area and shrink it to 9 acres, while making more room for “enclosed amusements.” The whole amusement district would then be run by a single “world class operator” – a move that’s outraged owners of the Wonder Wheel, who are fighting the city’s attempt to take over their family-owned ride.

Dick Zigun, the unofficial “mayor” of Coney Island who recently resigned as board director of the Coney Island Development Corporation, last night dismissed the city’s proposal as “a shopping mall by other names." Three high-rise hotels are currently being proposed for the area, as well as retail shopping outlets like Niketown and FAO Schwartz. The current plan includes 5,000 mixed-income housing units.

UPDATE: After the jump, two videos of Reverend Billy and Savtri's impassioned testimony.