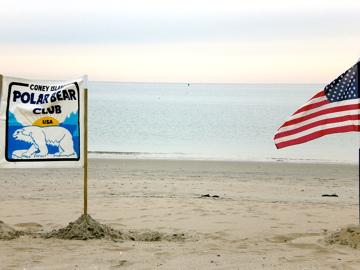 Their day in the sun ocean is just around the corner, but the Polar Bear Club of Coney Island may be in too deep with one donation they recently accepted. The Brooklyn Paper reports that in spite of the club "growling in the anti-Thor procession during the Mermaid Parade," the Polar Bears have "made peace" with Thor.

Polar Bears president Lou Scarcella explained that when Thor took condos out of their plans for Coney Island redevelopment, the group relaxed their opposition to the developer. He told The Brooklyn Paper, “We are definitely not sellouts. If Thor wants to help, I say fantastic.” The $2,000 donation goes to Camp Sunshine, a charity for children with life-threatening illnesses, which the Bears have been supporting for a while. Yeah - given that Thor's Coney plan is $1.5 billion, what's two grand?

Still, many residents are in an uproar, and they're venting at the Coney Island message board. Amongst them some Polar Bears are chiming in with their two cents, and one reposted a letter from the club's president which stated: "Now hear this and hear this good. For the last four years NO ONE, NO ONE in Coney Island except for Steve at Steve's Grill house has supported us. People, I know everybody in Coney Island, I have been here and worked here 35 years AND NO ONE offered one red cent."

Without local businesses donating this year, the club also turned to corporate sponsorship from Jimmy Dean sausages and Reebok. Is the donation symbolic of the changes happening in Coney Island, and are the Polar Bears guilty by association?

If you want to participate in the Polar Bear Swim on New Year's Day, you must pre-register.