Coney Island Parachute Jump to Brighten Up, Dumb Down 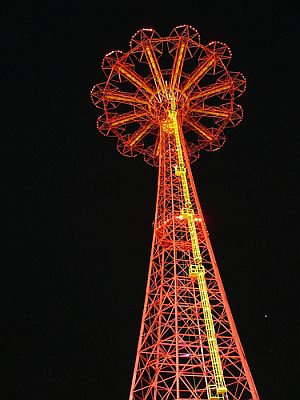 Get ready to groan: "I look forward to 'Phase Two' of the 'blinging up' of the Parachute Jump," said inveterate cornball Marty Markowitz during his recent State of the Borough speech. The 262-foot Coney Island landmark was retrofitted with a lighting system two years ago, but borough president Markowitz and others deemed the effect too subdued and “artsy.” Now the city is soliciting proposals from companies to create a flashier effect.

$1.5 million has been earmarked for the upgrade, which will also renovate the bottom of the Parachute Jump, an attraction moved to Coney Island after the 1939 World's Fair in Queens. It was originally constructed by the Life Saver company – hence the circles that still run around the base – and stopped giving rides in 1968. But if Markowitz, who has his eye on a mayoral bid, has his way that will change too: “Hey, if the Giants can beat the Patriots, there's no reason we can't ride the Parachute Jump in this new century.” Thanks for putting it in terms we can understand, Marty.

In other Coney Island news, The Gowanus Lounge notes that the high-profile Grimshaw Architects have been picked to design a possible amphitheater in Asser Levy Park in Coney Island. (This is the company behind the Queens Museum of Art redesign, as well as the Fulton Transit Center in Manhattan.) The hope is that the Coney Island amphitheater would become a stop on the summer concert tour circuit to rival Jones Beach. Which would be so boss, because there’s currently no venue for rock shows on Coney Island – oh, wait.