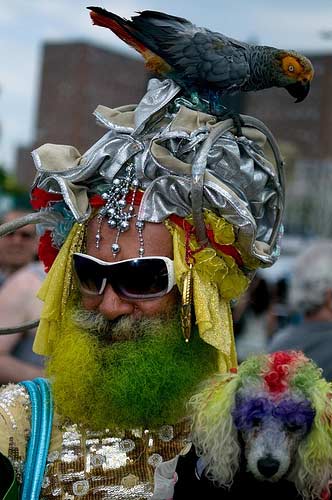 This afternoon (2 p.m.) is Coney Island's annual Mermaid Parade, which is the semi-official start of summer for many New Yorkers. It's generally one of the most joyous occasions one can come across in the five boroughs, so let's hope it doesn't take on a funereal tone considering the possible destruction of the boardwalk in its present state.

Mermaid Queen Savitri D. will commence a hunger strike this evening. She'll refrain from eating until the Community Board meeting on June 24th, where the future direction of Coney Island will be called into question; i.e. is the future going to be more sideshow carnie or glossy amusement park? If any readers make it to the annual Mermaid Parade and get pictures of the event, don't forget to upload them to flickr and tag them "gothamist" so they can be featured later. Or one can email them directly to tips@gothamist.com.

#boardwalk
#church of non-shopping
#coney island
#parade
#queen mermaid
#reverend billy
#savitri d
Do you know the scoop? Comment below or Send us a Tip