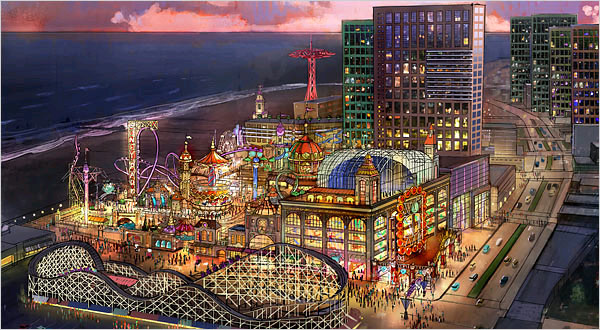 Controversial plans for high-rise luxury condos at Coney Island have now been scrapped, with developer Thor revising its plans to instead include a glass enclosed water park and hotel space. The city's planning department was very concerned with condominiums being included in the plan, but Thor had argued condos would be critical in keeping the project profitable. Now Thor CEO Joseph Sitt explained, "This is our way of being responsible and putting out an olive branch to the community and city administration."

Sitt said that a new "amusement-park hotel" would be built near where Astroland currently sits; the hotel will have indoor and outdoor rides. He told the Post, "If you have kids, what better hotel to stay at than one with its own amusement park and that is next to the historic Wonder Wheel on one end and has the landmark Cyclone on the other?" It sounds like Sitt has taken Astroland owner Carol Albert's advice; back in March, she told the Sun, "You could make money year-round in the amusement business in Coney Island by building a hotel or hotels instead of condos."

However, the NY Times notes that this change doesn't satisfy all the critics.

Robert Lieber, president of the city’s Economic Development Corporation, described Mr. Sitt’s new plan as a “wolf dressed up as a sheep.”...Mr. Lieber and others say that the time-share units look an awful lot like apartments and that the complex looks more like a mall than Coney Island.

“[Sitt] came in last week and presented a plan that had essentially the same density, but dressed it up with hotels and time shares,” Mr. Lieber said on Friday. “The building heights still exceed the 271-foot Parachute Jump,” a Coney Island landmark. “And he’s looking for a huge subsidy from the city. North of $100 million.”

It's true - the rendering at top does show buildings much taller than the Parachute Jump. Coney Island blog Kinetic Carnival writes that the new rendering looks similar to the old one (the new hotel/time share buildings are "Donald Trump style boxes with windows"), which doesn't seem to adhere to "Coney Island character," as city agencies hope for.