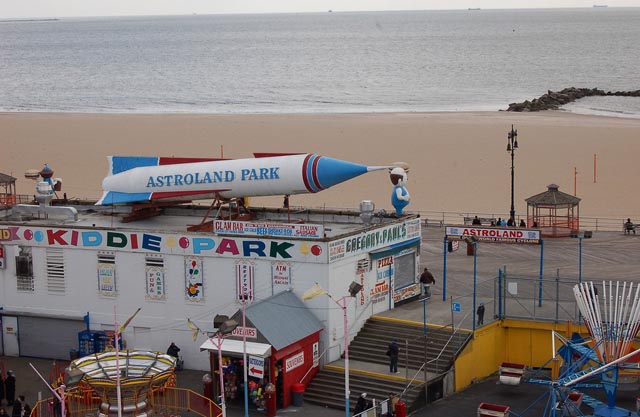 Carol Albert, owner of the Astroland amusement park on Coney Island, announced today that she has given up trying to negotiate a new lease with developer Joe Sitt, to whom she sold her property in 2006 for $30 million. Albert had promised to shut down permanently if Sitt did not offer her a lease for two years at the same rate by 1 p.m. today. Sitt spokesman Stefan Friedman tells the Post the developer won't negotiate "through the media or with a gun held to his head."

Though Albert's lease doesn't expire until January, she said she needs the extra months to sell off her rides. According to the Post, many involved with the Coney Island development had expected Astroland to return in 2009 because the city is at least a year away from implementing a controversial rezoning plan that would replace the park and other attractions with new amusements. But Albert's lawyer stressed that Astroland has seen expenses increase since last year, particularly a $700,000 surge in insurance costs.

Sitt plans to replace Astroland, which has been open for 46 years, with new amusements next season. The landmarked Cyclone rollercoaster and the Wonder Wheel will remain, but the future size and look of the Coney Island amusement area is still undecided.

#astroland
#closing
#coney island
Do you know the scoop? Comment below or Send us a Tip
A new Gothamist is coming! We’ve moved comments over to our beta site. Click here to join the conversation and get a preview of our new website.