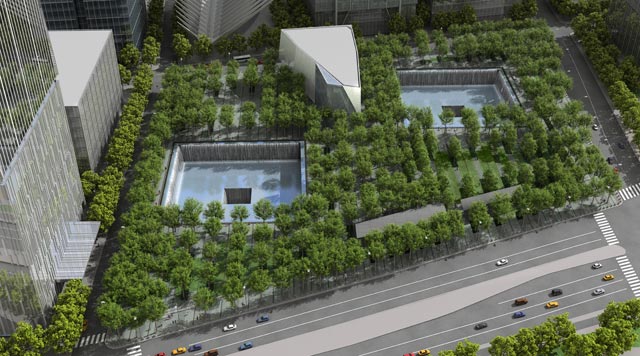 A Long Island City concrete firm won a contract to provide $103 million worth of "slabs, decks, walls and enclosures" for the September 11 memorial at the World Trade Center site. According to the NY Times, Navillus Contracting will be responsible for 45,000 cubic yards of concrete for the memorial itself as well as "adjacent underground areas" and the Port Authority's executive director Anthony Shorris said, "This contract will move us to the next level, allowing the memorial to begin to take form and rise to street level."

The WTC memorial, officially known as the National September 11 Memorial, was originally scheduled to open next year but is delayed until 2011 (construction began in 2006 but the memorial has been plagued with design changes, controversy and questions). Above and below are renderings of what the memorial and museum may look like.

In other WTC-related news: The Port Authority police are upset the NYPD wants to apparently take over security for WTC, a federal appeals court says the city can be sued by city employees and construction workers ill from 9/11 clean-up (which could cost NYC billions) and WTC developer Larry Silverstein is suing airlines and airport security firms for another $12.3 billion in damages from the attacks.