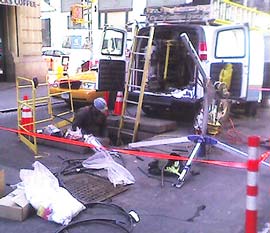 Con Ed and about 9,000 workers are locked in a contract battle that may threaten the city's power come Sunday. According to Utility Workers Union of America Local 1-2, the utility and workers are "miles and miles apart."

Union spokesman Joe Flaherty explained the union wants better wages and medical cost coverage, benefits for workers retired on worker's comp, and advancement in job titles. But Flaherty blasted Con Ed, "It's basically the Nancy Reagan school of negotiations - 'Just say no.' It seems to us that they want to initiate a walkout."

Con Ed says it's ready for a strike, telling the Daily News, "We plan for any contingencies - strike-related, too. More than half of our management is up from the ranks themselves." Um, contingency planning like they had for the Queens blackout? Please, make a deal!

Previous year's negotiations have worked out, though workers went on a nine-week strike in 1983, which caused a small blackout in Midtown.