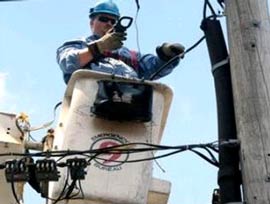 Tonight, if midnight strikes without a new contract from Con Ed, the 9,000 workers represented by the Utility Workers Union of America Local 1-2 could go on strike (unless Governor Paterson intervenes again, of course). The two sides are resuming their talks today at a NJ hotel.

Union spokesman Joe Flaherty said the two sides are still fare apart, with Con Ed only offering a 0.5% raise for the first year, and 1% raises in later years, "For the CEO of Con Ed to get a 24 percent increase and the managerials to get an eight percent or 15 percent and offer a half percent to the workers is an insult, and if that isn't trying to provoke a strike I don't know what is." The union is also fighting for other issues like, retirees' workers comp and other benefits.

While Con Ed has said its management is ready for a possible strike, with management even going back to the lines, Flaherty wondered to the NY Sun, "Do you think 9,000 can walk off a job and it will all be the same? Does that make sense? If there is an interruption in service, whether it's electric, gas, or steam service, the delays will be humongous."

The NY Times looks at how it's gotten more difficult for people to successful get jobs at Con Ed (last year, the utility only "picked up 528 people from a pool of 26,000"), and how salaries and benefits have marginally gotten better or even decreased. There's also been tension between older workers and the younger workers, who were hired with much less experience.