Con Ed Is Testing Out Congestion Pricing For Electric Bills

It’s a setup that has long defied the rule of supply and demand: A watt of electricity in New York costs the same whether a residential customer uses it on a mild spring evening, when demand is low, or during an August heat wave, when the usage needle is pinned to the danger zone. As a result, there has been no reason to care whether you’re running your dishwasher or, say, firing up your electric mustache waxer during peak or off-peak hours.

Con Edison has noticed and, with the advent of smart meters, thinks it can do something about it. The plan is to reduce spikes in demand by using variable rates—a kind of congestion pricing for residential energy.

About 15,000 customers in Staten Island and Westchester have been enrolled in a pilot program, set to start on April 1st, that will give them reduced rates for electricity usage during off-peak hours. Customers can opt out of the pilot but the utility says that, so far, participation is running at eighty to ninety percent. .

Con Edison engineer Bill Atzl is helping design the pilot and says the price of power will significantly differ by time of day. “In the summertime, the peak to off-peak rate is about two and a half to one,” he explained. (Con Edison defines summer as June through September.)

Smart meters allow the utility to adjust rates in a way that nudges customers to use energy at times when its equipment is less burdened. The approach is similar to the way congestion pricing would charge drivers a higher toll to enter Manhattan during hours of maximum traffic stress on business days.

Atzl said the pilot will experiment with two different peak time windows: noon to 8 p.m., and 2 to 10 p.m. Staten Island and Westchester were picked to be the program’s guinea pigs because they have high concentrations of homes with smart meters. About a million of Con Edison’s 3.6 million customers have had the smart meters installed over the past two years. The utility says every residence should have one by the end of 2022. 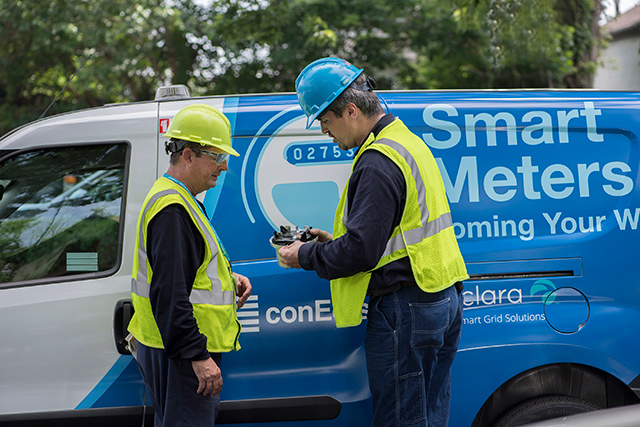 Customers in the pilot will also be offered a second way to save money. Atzl said that because not all energy usage can be shifted to off peak hours, Con Ed will give discounts to customers who alter their behavior during peak hours. “Customers will simply have to stagger their usage of major appliances during the peak period,” he said. Meaning, it'll cost less to use appliances one after another instead of all at once. Atzl said no other utility has tried to use this kind of variable pricing to nudge people into stretching out their energy use over time, reducing spikes and smoothing out demand.

Beia Spiller, senior economist with the Environmental Defense Fund, says it could produce modest but meaningful changes in behavior. “Maybe we come home and turn on the air conditioner but we wait until evening to do our laundry,” she said. “Staggering these appliances reduces the cost on the system.”

New York and Westchester are booming economically and growing in population—and keep setting records for peak electricity usage. To meet the demand, Con Edison must keep adding expensive plants and power lines. Spiller said that at the current rate, a Brooklyn substation could soon max out: “What Con Edison foresaw was that if peak demand continued to rise at the rate it had been going, within a very few short years, they were going to have to pay a billion dollars to upgrade that substation.”

Bill Aztl of Con Edison says using variable rates to lessen peak demand—and, with it, the need for new substations—could save serious money. “That lowers our infrastructure costs and by doing that we lower our costs for all of our customers,” he said.

And he sees another benefit to changing customer behavior. “To the extent that they use less energy, it helps the environment,” he said. This happens in two ways. First, during periods of high usage—like that heat wave in August—Con Edison draws additional electricity from anywhere it can get it, including sources with high emissions such as coal and other combustible fuels. Lowering the highest of those high peaks means using smaller amounts of dirty fuel, which lessens emissions. Second, Con Ed tends to use more renewable sources of fuel during off-peak hours—another eco-friendly reason to shift usage to that window.

Con Edison says it's expecting customers in the variable pricing pilot program to see lower bills. If they don't, they'll be reimbursed. If the program works, it could go system-wide. One day, we could all have the habit of doing our laundry earlier than noon or later than ten at night ... and of not blendering that smoothie until after the pizza is re-heated.

EDITOR’S NOTE: After this story was published, a representative from ConEd said the pilot program is happening in Staten Island and not Manhattan, as a previous spokesman told WNYC/Gothamist. This article has been revised accordingly.