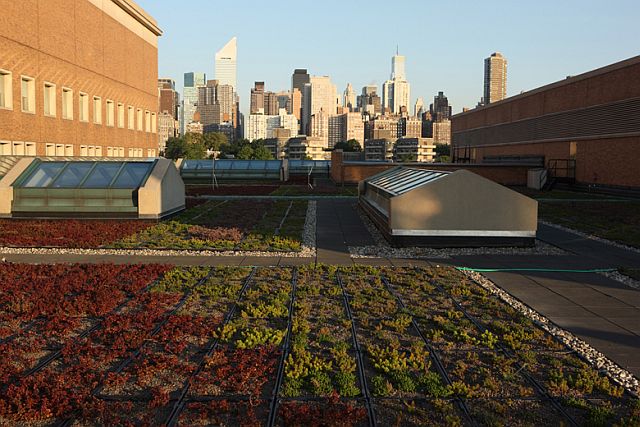 The Con Edison training and conference facility in Long Island City, Queens has joined a small but growing family of buildings with green roofs, which absorb heat, reduce the need for air conditioning, and help improve air quality. According to the Sun, Con Edison projects that the green roof will save the building up to 30% in energy costs. There are now 21,000 plants atop the three-story facility, including 15 varieties of sedum, a shrub like plant typically found in desert climates which can absorb rainwater and is resistant to pests.

Because of high labor and transportation prices in New York, green roofs have not caught on as quickly here as in other American cities and in Europe, the Times notes. But last month Governor Paterson approved tax abatements for developers and building owners who install a layer of vegetation on the roof. The credits are worth about $4.50 per square foot of vegetation; Paterson likes green roofs because they can absorb as much as 70% of the rain that would otherwise end up flooding the sewage system during heavy rainfalls, potentially sparing our waterways millions of gallons of polluted water.

As for Con Edison, the company spent $200,000 to install 1,350 trays filled with the plants, which sit in a mixture of volcanic rock, sandstone and other absorbent stone. Columbia University’s Center for Climate Systems Research will evaluate the benefits using rooftop sensors to measure the temperature, wind and water runoff; the findings will then be used to promote green roofs to customers.

#con ed
#con edison
#green roof
#paterson
#tax
Do you know the scoop? Comment below or Send us a Tip