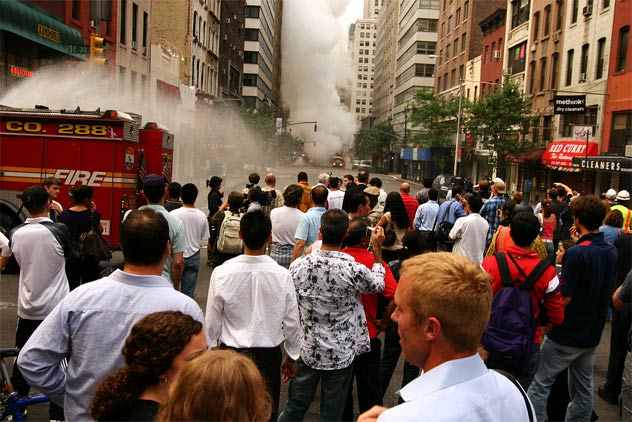 Con Ed has filed a $25 million notice of claim against the city over the July 18 steam pipe explosion outside Grand Central. The Daily News got a hold of the notice of claim which says the event "may have been caused, in whole or in part, by acts or omissions of the city." Which then prompted the News to exclaim "Watt Nerve!"

Con Ed says it may not sue, explaining, "This is a routine procedural matter, necessary in the event the investigation determines that the city's infrastructure contributed to the steam rupture." Well, they filed just in time - the city only allows notices of claim to be filed within 90 days of the event (PDF).

A number of businesses and individuals are lining up to sue Con Ed and the city; we think first in line are the family of Gregory McCullough, the young tow truck driver severely burned on over 80% of his body; his passenger Judith Bailey, burned on 30% of her body; and the family of Lois Baumerich, who had a heart attack and died. In 1989, when a steam pipe exploded in Gramercy Park, killed three people, and damaged building, Con Ed spent $54 million to settle.

Mayor Bloomberg referred to the explosion as a failure of the city's infrastructure. And in August, the City Council was confused why Con Ed still didn't know what caused the explosion (one hypothesis: A steam trap).