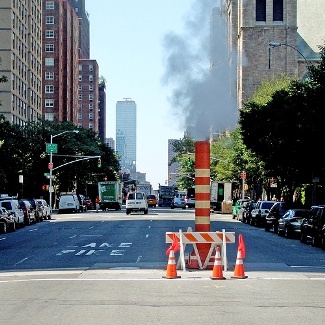 You'd imagine that Kevin Burke, the chairman, president, and CEO of Con Ed, would want to attend at City Council meeting about the steam pipe explosion on July 18. But, no, Burke isn't showing up, which annoys many Council members. The Sun has a good look at the head of the city's essential and currently reviled utility.

Though the Sun couldn't get a comment from Con Ed about Burke's absence (SVP of central operations William Longhi is attending instead), some City Council members from Queens surmised that Burke didn't want to be raked over the coals again for last summer's ridiculous Queens blackout. During a Queens blackout City Council meeting, Councilman Peter Vallone reportedly told Burke, "A 12-year-old on a bike could have estimated damage better than your multimillion-dollar company did."

Some details about Burke: Burke is a Queens native who attended Cooper Union, then Rensselaer Polytechnic Institute for engineering and Fordham Law School; he also has a master's in business policy from Columbia. With a base salary of $1 million, he received $4.7 million last year including benefits and stock options. The Sun also mentioned he "donated money to Rep. Charles Rangel, Senator Clinton, and President Bush."

Yesterday afternoon, there was a 58-minute blackout in Flushing that affected less than a thousand customers. Councilman John Liu said that translated to five thousand people (a Con Ed customer can equal an entire apartment building), "This is at least the fourth blackout to hit the Flushing area within the past nine weeks. The frequency of these blackouts, albeit troubling, is not surprising." And on Friday, Con Ed had asked about 81,000 customers to conserve energy because of "difficulties."

Photograph of a steam vent by edEx on Flickr