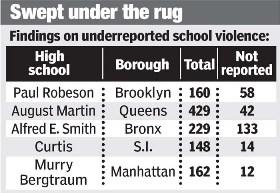 Well, this is disturbing: The City Comptroller's office audited ten high schools in the city and found that they did not report 41% of the violent/disruptive incidents that occurred. Schools are supposed to file information about incidents, which range from vandalism to assaults, through a computer system so the state has the information, part of the No Child Left Behind law. The state then uses that information to determine which schools are dangerous, persistently dangerous, etc.

However, the audit showed that many schools failed to report things like rape (at the Boys and Girls High School in Brooklyn) and a stabbing (Clinton High School in the Bronx). Schools were keeping track of incidents like students "about to be jumped" by gang members in their files, but didn't enter them into the computer.

Comptroller Bill Thompson said that some principals were driven to undercount incidents in order to lower crime statistics. He said reporting instructions are vague and wants the Department of Education to have more oversight and train teachers better. The teachers union head Randi Weingarten told the NY Times, "Making schools seem safer than they really are does a disservice to parents, students and educators because those schools don’t get the attention and resources they need to be made safer, putting everyone inside at risk."

The DOE says that the comptroller's audit, using information from the 2004-2005 school year, doesn't apply to the reporting system now, because it's been revamped and that the ten schools in the audit are not representative of the school system as a whole.