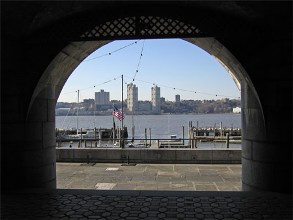 City Comptroller William Thompson Jr. sharply criticized the Parks Department after his office examined the 79th Street Boat Basin's financial statements, finding many discrepancies and possible criminal activity. Thompson said, "During the course of the audit, a number of red flags were raised. The number and magnitude of these red flags raised the question of whether fraud occurred at the Boat Basin.”

The Boat Basin has 60 moorings and 110 slips for boat owners, and the Parks Department manages "seasonal dockage, parking, storage and other services" for those living there. Some "fraud indicators" were things like 23 customers saying they paid $66,250 for car parking fees in 2005, but the Chief Dockmaster only recorded $22,750 in payments. Then, in 2006, 25 customers saying they paid $71,000 in fees in 2006, but only $57,750 was recorded (the Parks Department started to phase out cash payments between 2005 and 2006, which is probably why the discrepancy is smaller). Plus, the Comptroller's office wasn't very amused by how long it took for documents to be gathered and sent to them.

The Parks Department said it "has strengthened the management and financial controls of the 79th Street Boat Basin and has already implemented many of the changes suggested in the audit." But Thompson said, “This is just an absolute financial mess. If any of us ran our households like this, we’d probably wind up bankrupt.”