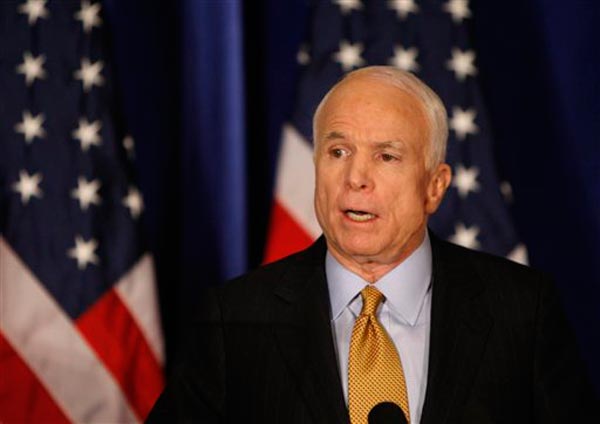 Republican presidential candidate John McCain said he was temporarily suspending his campaign tomorrow and asked for Friday's much-anticipated debate with Democratic candidate Barack Obama be delayed, so he can work on the bailout plan in Washington D.C. He said he contacted Obama's campaign and emphasized that partisan differences must be put aside for a solution (not counting that both Democrats and Republicans have problems with the plan).

McCain said, "We must meet as Americans, not as Democrats or Republicans, and we must meet until this crisis is resolved. I am directing my campaign to work with the Obama campaign and the commission on presidential debates to delay Friday night’s debate until we have taken action to address this crisis... Following September 11th, our national leaders came together at a time of crisis. We must show that kind of patriotism now."

Obama's campaign did confirm he spoke to McCain ("Senator Obama called Senator McCain to ask him if he would join in issuing a joint statement outlining their shared principles and conditions for the Treasury proposal and urging Congress and the White House to act in a bipartisan manner to pass such a proposal...") but did not mention anything about delaying the debate.

Is McCain's timing suspect, given that Obama now has a clear lead over him, according to a Washington Post-ABC News poll? Politico's Jonathan Martin writes, "Coming a week after McCain struggled to find his footing on the crisis and as national and state polls show him slipping in large part because of voter concerns over the economy, it also amounts to a dare: How can Obama say no?" 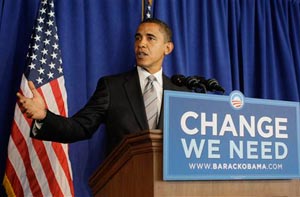 UPDATE: Obama had "a hastily arranged news conference" in Florida, where he said the debate should go on, "This is exactly the time when people need to hear from the candidates... Part of the president’s job is to deal with more than one thing at once. In my mind it’s more important than ever.” (Obama also agreed that "there are times for politics and there are times to rise above politics and do what’s right.”)

And ABC News reports that an Ole Miss (where the debate is supposed to be held) official said postponing the debate would be "devastating." The school has spent $5.5 million making accommodations for the event, and Andrew Mullins, special assistant to the University Chancellor Robert Khayata, said, "It's huge. You cannot just say that you're not going to do this thing. I don't have any idea whether we do the debate [at a later date]. (We) probably wouldn't do it."