Commuting Through Penn Station To Truly Suck For A Long Time

The R train's closure may have been the least of our Hurricane Sandy-related transit problems. According to a report released by Amtrak [PDF], the tunnels underneath the Hudson and East Rivers sustained significant damage from flooding and will need extensive repairs, which will require cutting commuter rail service by roughly 20% under the East River, and 75% under the Hudson.

LIRR and Amtrak use the four tubes underneath the East River, two of which were flooded during Sandy. The two tubes under the Hudson are used by NJ Transit and Amtrak, who carry more than 400,000 people through them on an average workday, according to the Times.

Standing next to the Tappan Zee Bridge this summer, President Obama noted that America has 100,000 bridges that are old enough to qualify for Medicare. New York's tunnels, built by the Pennsylvania Railroad around 1900, are old enough to have fought in World War I. Saltwater from the flooding has created cracks and corrosions that can no longer be ignored. 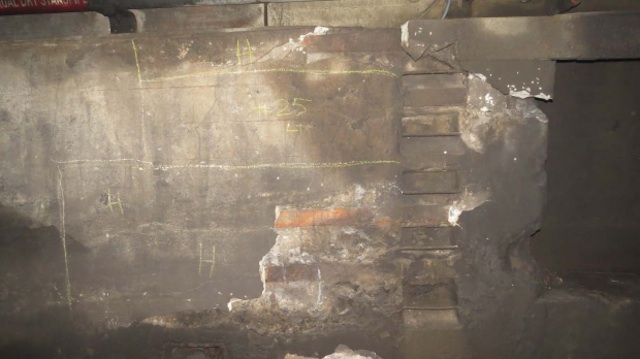 The $689 million renovations (most of the costs will be picked up by insurance) won't begin until late next year, beginning with one of the East River tubes. Each tunnel will need to be closed for a full year.

A spokesman for the Governor Of Why We Are In This Mess told NorthJersey.com, “Governor Christie has always recognized the need for additional trans-Hudson transit capacity. The governor is open to a plan that is well-engineered but also fair and equitable to New Jersey."

“The fact that we don’t have ARC puts us much more under the gun now,” Richard Barone, the director of transportation programs at the Regional Plan Association told Capital New York. “There’s a worst case scenario where you could potentially be at a loss of both tunnels. There’s a lot of uncertainty because we’re in uncharted territory looking at infrastructure of this age.”

Amtrak wants to build its own tunnel, which they're calling the Gateway project, but it hasn't been fully planned out and no one knows where the money will come from. WNYC reports that if everything "lines up perfectly," it could be completed by 2025. If it even happens at all. ARC was supposed to be finished in 2018.

#amtrak
#Chris Christie
#lirr
#mass transit
#nj transit
#penn station
#republicans
Do you know the scoop? Comment below or Send us a Tip