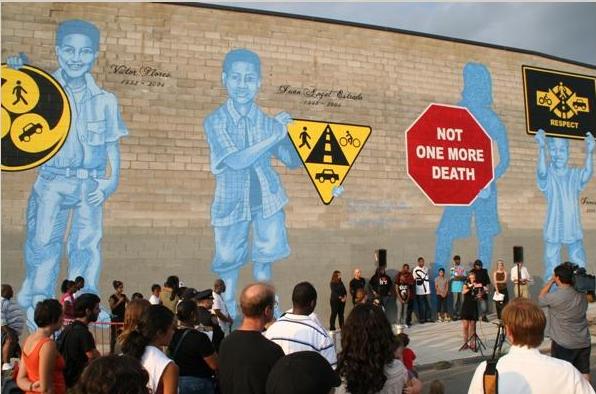 In recent years, Third Avenue in Brooklyn has seen three children killed by vehicular traffic. Last year, 4-year-old James Rice was fatally struck by a Hummer at Third Avenue and Baltic Avenue, and in 2004, PS 124 Juan Estrada and Victor Flores were fatally struck by a vehicle as they crossed Third Avenue at Ninth Street, just blocks away. On Tuesday, arts organization Groundswell Community Mural Project unveiled a mural at Third and Butler: In the mural, the three children are represented, asking drivers, bicyclists and pedestrians alike to respect each other on the road and to prevent any more tragedy.

As Streetsblog had reported shortly after Rice's death, the Department of Transportation had made recommendations like creating neckdowns and a raised crosswalk in the wake of the 2004 deaths, but never actually did anything. Recently, the DOT told the Brooklyn Paper that work for road improvements to increase safety will begin soon.

Brit in Brooklyn has more pictures of the mural's unveiling. Rice's grandfather spoke, imploring drivers to be more careful - the Hummer driver who hit Rice only got a ticket for failure to yield.