In a report released Thursday, Governor Cuomo's Common Core Task Force criticized the state's implementation of the Common Core Standards and called for a deemphasis on testing, among other recommendations. Cuomo has a mixed record on this issue: he increased the role of test scores in teacher evaluations up to 50 percent just this March, but was said to be shifting gears in the face of parent, teacher, and student outrage (one fifth of students boycotted state exams this year, though that number was much lower in the city). He convened the task force this September.

"The Common Core was supposed to ensure all of our children had the education they needed to be college and career-ready—but it actually caused confusion and anxiety," Cuomo said in a statement on Thursday. "That ends now."

Implemented in New York in 2009, the Common Core has received a considerable amount of criticism for its emphasis on testing: some say the tests are too difficult and stress-inducing, and there is a significant achievement gap between white and Asian students and black and Hispanic students. Taking into account the feedback of 2,100 students, parents, teachers, and administrators, Cuomo's task force recommends that no test scores be used to evaluate students or teachers until the 2019-2020 school year, at which point the state can implement its own improved standards.

These new standards would be more age-appropriate in the elementary school grades, more accommodating to students with disabilities and students learning English as a second language, and more encouraging of "love of reading and joy of learning"—which some have argued the Common Core dissuades. The task force also recommends reducing testing time and preparation; potentially transitioning to untimed testing; and exploring testing alternatives for disabled students. You can read the full recommendations here: 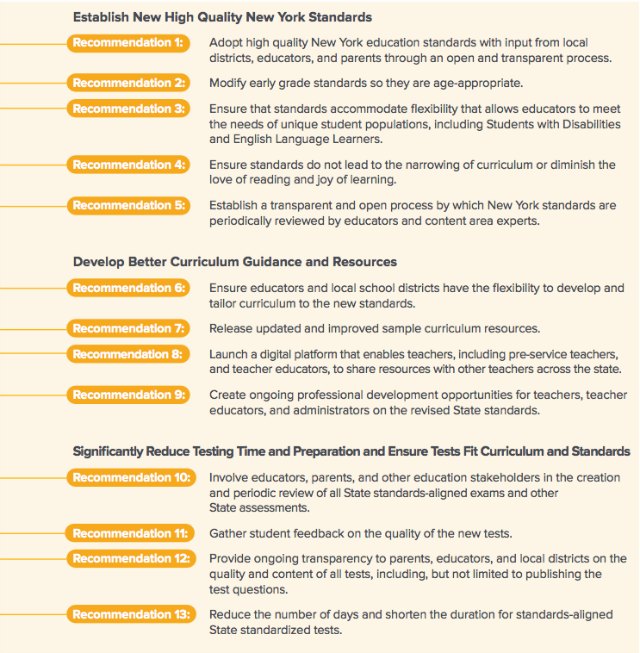 The report has been met thus far with positive feedback from the teachers union: United Federation of Teachers president Michael Mulgrew told the New York Times that Thursday was a "historic day" that "marks the end of the test-and-punish education ideology.”

Ultimately, the implementation of these recommendations is up to the state Board of Regents, who Cuomo has previously criticized for their "flawed and mismanaged" implementation of the Common Core. In a statement, Board of Regents Chancellor Merryl H. Tisch did not mention the report's recommendations on testing, but said that "[t]he most important message in the Task Force report is the renewed commitment to adopting and maintaining higher standards."

However, as the Times points out, several new members of the Board of Regents have expressed opposition to excessive testing, so there is a good chance these recommendations will be enacted in the next month—though how different they will actually be, given the directive to "maintain the key instructional shifts set forth in the Common Core," remains to be seen.

#common core
#education
#governor cuomo
#regents
#testing
Do you know the scoop? Comment below or Send us a Tip