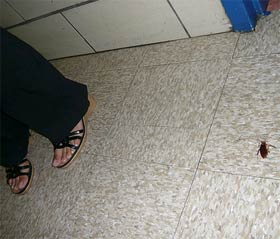 Members of the press pool reportedly swooned for Police Commissioner Ray Kelly yesterday when he saved them from vermin with a swift flick of his foot. According to the Daily Politics, Kelly’s press conference to announce an 11 percent drop in major felony crime at city schools was interrupted by “gasps and squeals” as “various female reporters” noticed a giant cockroach crawling “dangerously close to a bag belonging to WNBC-TV's Melissa Russo.”

But while others froze in panic, our commissioner took charge. According to the transcript, Kelly stepped up and showed those eggheads how they handle roaches in the NYPD:

(Kelly):"With the right shoes, you can get right up on it."

(He then stamps on the cockroach, which squishes in a satisfying sort of way, eliciting several loud and admiring EWWWWs and OHs from the press corps.)

Forget throwing money away on expensive exterminators—next time you’ve got an infestation, just put your tax dollars to work by calling 911!

Photo of the cockroach carnage via the Daily Politics.

#cockroach
#press conference
#raymond kelly
Do you know the scoop? Comment below or Send us a Tip