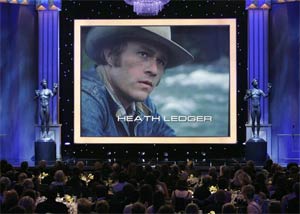 After intense speculation about why the masseuse who discovered Heath Ledger's body last Tuesday called actress Mary-Kate Olsen multiple times, Police Commissioner Ray Kelly spoke to reporters yesterday to clear the air. Kelly said, "We believe that of the three phone calls by the masseuse to Mary-Kate Olsen, only one got through. That call was 99 seconds long."

Commissioner Kelly further emphasized, "There is absolutely no indication that investigators were going to speak to Mary-Kate Olsen. They determined that they had all the information needed, by the witnesses who were on the scene." Olsen had been in Los Angeles at the time, and after a call, sent body guards to Ledger's Soho apartment.

The Post, which had claimed police wanted to question the actress and then (after the NYPD denied wanting to speak with Olsen) used its Saturday cover to wonder about Olsen's involvement, says that 10 minutes elapsed between the call that did make it to Olsen and the call masseuse Diana Lee Wolozin eventually made to 911. (Then the Post adds that EMTs believe Ledger was likely dead before being found.)

Over the weekend, TMZ reported (per "sources") that Ledger's death could have been from natural causes, because toxicity levels appear to be low. Yesterday, at the Screen Actors Guild Awards, Daniel Day-Lewis, who won an "Actor" for his role in There Will Be Blood, dedicated his award to Ledger, describing Ledger's acting as perfect (video). Some anti-gay protesters were picketing outside the event as well.

Photograph from the SAG Awards tribute to Ledger by Mark J. Terrill/AP