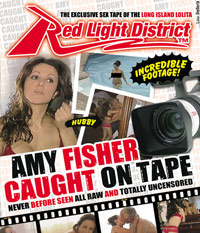 Today we wrote a post on one-time Long Island Lolita Amy Fisher's contention that she was not appearing publicly to celebrate the release of her sex tape, but simply that she got paid a lump sum of money for the video of her having sex with her husband and that she agreed to talk about it publicly as part of her deal with the porno verite's distributor. She also didn't appreciate the editing that made her look bad on her Good Morning America appearance. Unless the show digitally edited that fake leopard fur vest onto her, we doubt that was the real problem with her appearance.

Reader bornbrednewyorker has seen the video and gives it a thumbs down:

One can read the full thread of comments here.

#america
#Amy fisher
#comment of the day
#George Romero
#Good Morning
#good morning america
#long island
#sex tape
Do you know the scoop? Comment below or Send us a Tip