by Cindy Rodriguez and WNYC Staff

During the second day of the disciplinary trial for NYPD officer Daniel Pantaleo, the Commanding Officer in charge of training recruits at the Police Academy defined a chokehold as “any pressure to the throat or windpipe that could hinder breathing.”

Pantaleo stands accused of using a prohibited chokehold while trying to arrest Eric Garner for allegedly selling untaxed cigarettes on a hot July day in Staten Island in 2014. Garner died during the arrest and his death was ruled a homicide by the city Medical Examiner. His defense attorneys have maintained from the start that their client used what’s called a seatbelt maneuver, which is approved by the NYPD and differs from a chokehold in that it involves putting an arm over a person’s shoulder and not around their neck.

But after being shown a still photo taken from video footage shot by Garner’s friend, Deputy Inspector Richard Dee stated that Pantaleo was, in fact, using a chokehold.

“I believe what we see is a chokehold,” Dee said. “As the department defines it?” asked Prosecutor, Jonathan Fogel. Dee responded, “Yes.”

Dee at first said it was difficult to tell whether there is pressure to the windpipe but after being shown several different shots he repeatedly concluded that Officer Pantaleo was using a chokehold.

“At that point he coughs,” he said. “And so yes, I do believe that meets the definition of a chokehold.”

In training materials, Dee said recruits are told that chokeholds include but are not limited to what are called “bar arm holds” and “karate holds” and that while police officers in other places have used them, not intending to kill, “they are deadly."

When asked if he would have put his hands on Eric Garner, he said that from where he sits, with 30 years of experience, he would’ve “waited a little longer."

Dee said there was backup on the way and that it would’ve been easier to take down Garner with four officers instead of two. He also pointed out that Garner may have chosen not to fight had he been faced with four officers.

The high ranking NYPD official also testified that at the time Garner died, the chokehold was possibly the only physical use of force prohibited by the police department. 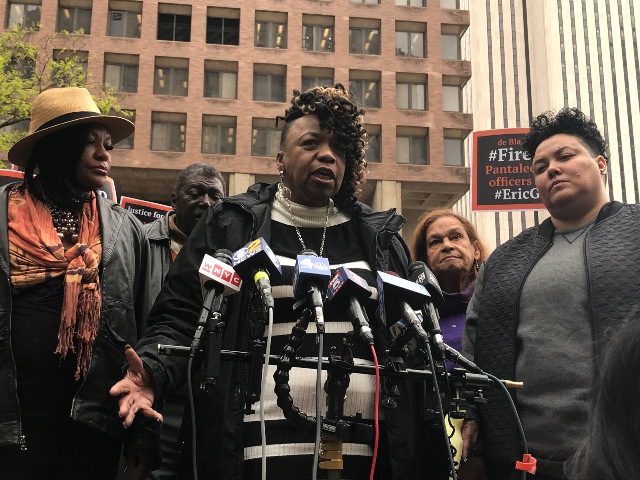 Outside the trial room, Gwen Carr, Garner’s mother, said Dee’s testimony raised the question of why Pantaleo was not fired immediately.

“Because that sounds like it should be immediate, I mean immediate dismissal,” she said.

In addition to his testimony about the chokehold, Dee also said that according to Pantaleo’s training transcript, he was never taught the so-called seatbelt maneuver. Fogel, the prosecutor, asked him how he could be sure of that.

Pantaleo entered the academy in 2006 and according to his transcript Dee said the only other training he had received since then is on being a plainclothes officer. He said he confirmed the seatbelt maneuver was not part of that curriculum either.

During cross-examination, Dee also gave Pantaleo and his partner credit for trying to de-escalate the situation at first. He was asked if officers were trained on how long they are to wait before using physical force and he answered, “no.” According to the video, about four minutes passed before Pantaleo began to physically confront Garner.

Prosecutors said they intend to call the city medical examiner who performed Garner’s autopsy to testify on Wednesday.

#chokehold
#daniel pantaleo
#eric garner
#nypd
#original
Do you know the scoop? Comment below or Send us a Tip