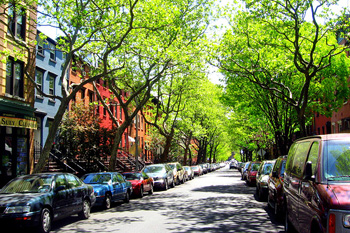 New York's about to get a lot shadier. According to the NY Times, the City Planning Commission just approved a new section of the Zoning Resolution, that requires developers to plant trees. For every 25-feet of street, one tree must be planted. This new rule goes hand in hand with MillionTreesNYC, an initiative of the Parks Department and New York Restoration Project that aims to plant one million new trees in the next ten years (a number that doesn't take into account programs like Trees Not Trash).

The last tree census, held in 2005-2006, counted 592,130 trees growing from the city's streets, 93,000 more than ten years prior. The London planetree is the city's most popular species, followed by the Norway maple. Surprisingly, the Ginkgo is the least most plentiful, making up only 2.8 percent of city trees.

Here are a few of the super-hero actions of trees, according to MillionTreesNYC:

Read this list of some of the best types of trees to plant in New York City, and get ready for one hell of an Arbor Day.

#milliontreesnyc
#NY Restoration Project
#Park Department
#plan
#planting
#trees
#Trees Not Trash
Do you know the scoop? Comment below or Send us a Tip